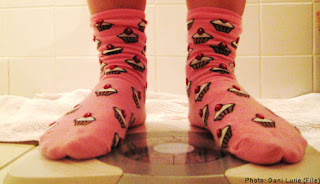 The Weight Watchers participants had gathered in the group’s facilities to see how much weight they had lost.

As it turned out, however, people’s weight was not the only thing to fall.

“We suddenly heard a huge thud; we almost thought it was an earthquake and everything flew up in the air. The floor collapsed in one corner of the room and along the walls,” one of the participants told the Smålandsposten newspaper.

Then floor then started to give way in other parts of the room. Shortly thereafter, the smell of sewage began to waft up into the room.
------
They thought it was an earthquake?

Maybe the only television they watch in Sweden is "The Biggest Loser."
Posted by Palmoni at 7:25 PM

Palmoni, what happens after we hit 1400 in the SP, do we drop back to where we are at now?

I don't think so-but I think we'll pull back once we get above there.

Then we should be able to see a 10% correction