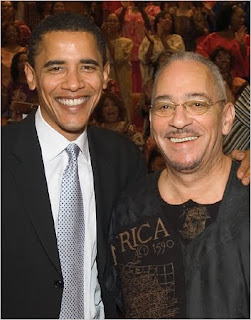 ABC news found out that Obama only went to church three times the last year in Washington DC, and that he even skipped during Christmas.

Maybe Obama didn't like the clergy in DC.He didn't miss church in Chicago.

"Them Jews ain't going to let him talk to me," Wright said. "I told my baby daughter that he'll talk to me in five years when he's a lame duck, or in eight years when he's out of office. ..."They will not let him to talk to somebody who calls a spade what it is. ... I said from the beginning: He's a politician; I'm a pastor. He's got to do what politicians do."

Thus Obama, who had to keep up his image, and had to pretend that he still wasn't a disciple/schill of Jeremiah Wright, so he came up with this beauty.

"My Faith and Neighborhood Initiatives director, Joshua DuBois, he has a devotional that he sends to me on my BlackBerry every day," Obama said. "That's how I start my morning. You know, he's got a passage, Scripture, in some cases quotes from other faiths to reflect on."

Showing that his only conviction is what the polls say, despite him saying otherwise this morning!
Posted by Palmoni at 5:00 PM