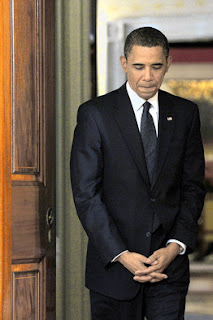 Reported on by the WSJ:

One day after losing their filibuster-proof Senate majority in a Massachusetts special election, exhausted Senate Democrats looked downtrodden as they filed into their weekly lunch in a second-floor room at the Capitol. "People are hysterical right now," said one Senate aide.

Party members clashed openly over what to do next. Sen. Max Baucus, a top Senate Democrat, appeared to throw cold water on a bill that would focus only on stiffer insurance regulations. Rep. Charles Rangel, chairman of the House Ways and Means Committee, scotched another idea, a complicated parliamentary maneuver to usher a bill quickly to the president's desk.

In an interview with ABC News, President Obama said he would be open to scaling back the legislation in order to salvage it. "I would advise that we try to move quickly to coalesce around those elements in the package that people agree on," Mr. Obama said. White House Communications Director Dan Pfeiffer said later the president would prefer Congress to pass the comprehensive package, and hasn't given up on that option.

A pared-down bill could still restrict insurance companies from denying care and overcharging customers, but would likely jettison a mandate requiring everyone buy insurance. That provision opened Democrats to charges that they were unreasonably expanding the scope of government.

Without such a mandate, government would no longer need to raise as much money to subsidize the uninsured and expand Medicaid, and so wouldn't have to significantly raise taxes. A smaller bill could instead offer a more modest expansion of insurance coverage, help for small business to buy policies, and new cost controls, among other things.

Insurance companies, however, argue that without a mandate that everyone buy insurance, premiums would likely rise.
Posted by Palmoni at 8:07 AM