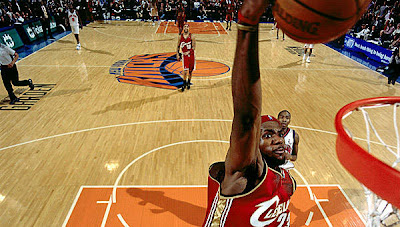 So the Saints can clip Favre below the knees, and have late hits that the refs miss, but if you kick a "water bottle" in the NBA, you get fined 25K!

Some courtside folk got a little Gatorade. 51 seconds into the clip below.

So for those who had courtside seats, I give the the latest on Lebron from  The Onion!

CLEVELAND—Though Cavaliers forward LeBron James stated last year that he fully intended to participate in the 2010 Slam Dunk Contest, the NBA All-Star told reporters Monday that a complicated enrollment form prevented him from signing up. "One of the questions asked me to list any dependents I might have," said a visibly confused James, adding that, while he completed the portion of the form asking what type of dunks he would perform, he was unable to provide the information required on how long each of his dunks would take and how many degrees they would be in total. "I put down my mom as a dunking emergency contact in case I got hurt, but they said the contact had to live in the Dallas area. And what did it mean when it said I could e-file the form?" Defending slam-dunk champion Nate Robinson once again successfully enrolled in the competition, saying that he hires a team of attorneys every year to help him fill out his paperwork.
Posted by Palmoni at 9:25 PM

C'mon you can't compare basketball with football. You get a foul for touching the other player in basketball!!

yeh you're right--The NBA is the biggest group of babies in the world!