Another $8 billion on the bail-out tab for Goldman Sachs? 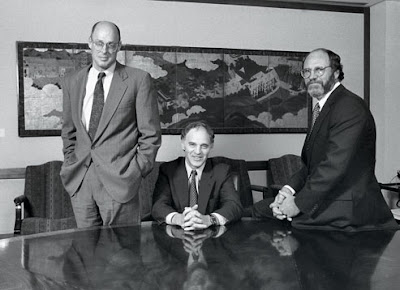 Today, Jim Cramer was getting hysterical on his defense of Goldman Sachs. Just like he did last Thursday when the stock was breaking the 160 level on CNBC. Now its close to breaking 150, so he's upping it a noy=tch.

Here's what he said:

What is the goal of the endless investigations of AIG  What is supposed to be accomplished? I have a theory. Once again, this is all about Goldman Sachs...

That's right, it is just like the stories that The New York Times reported that somehow Goldman Sachs got preferential treatment from the government when AIG paid out on Goldman's insurance. This whole exercise in AIG-flogging is not about how AIG made good on saving the European banks that were insured by AIG's London office. Those are never mentioned.

It is about getting the suddenly despised Treasury Secretary Tim Geithner to admit that he checked in with Goldman over and over, that Hank Paulson (formerly of Goldman) made sure that Goldman paid out, and it is about closing the link to make sure that the taxpayers know that they saved Goldman and that's what makes Goldman's obscene profits so horrid.

Well Jimmy, maybe your sarcasm isn't far from the truth. Because the trial is about Goldman. And its about another $8 billion. Maybe you think this is a show trial. It is. It's called 'show me the money" and then we'll have the answers.

Maybe, Jimbo, you think the SIGTARP investigations are a waste of time. Most people don't. They  can smell a putrid, rotting fishes miles away, even if you can't.

Now the party line, for the Treasury Inspector General, Neil Barofsky, who seems to be the only one in Washington DC, that is not beholden to the bankers is that, "With respect to these investigations, it is SIGTARP's policy not to comment publicly on non-public, ongoing criminal or civil investigations." I suppose he's just another conspiracy minded, tinfoil wearing hat idiot that doesn't worship at the feet of Goldman.

So why Jimmy, is SIGTARP increasing their investigation of the Federal Reserve?

In light of these documents, we have initiated an investigation into whether there was any misconduct relating to the disclosure or lack thereof concerning the Maiden Lane III transactions. Third, additional documents and facts have come to light that have caused SIGTARP to initiate an investigation to review the extent of the Federal Reserve’s cooperation with SIGTARP during the course of the audit. For example, in connection with the recent document productions to this Committee, documents have come to light that were not provided to the SIGTARP audit team during the course of the audit. FRBNY’s outside counsel has told SIGTARP that FRBNY will cooperate fully with SIGTARP’s investig

So tomorrow, during the show trial, why doesn't someone simply ask if Goldman offloaded $8 billion of AIG exposure to Deutsche Bank,and then rigged a swap to offset the exposure.

For those that like pictures, you can see it here.

Nobody in their right mind was increasing their exposure to AIG's CDO portfolio. So what happened to Deutsche Bank? Why did $8 billion magically pop up on their books? Now supposedly we've heard that Deutsche Bank was the sole arranger of the MAX CDOs that showed up on Blackrock's report. Really? Check out this Fed report on Maiden Lane at that time. $7.5 billion worth $3.33 billion?

From the SIGTARP report:
Goldman Sachs has since explained that it did not agree to concessions because it would have realized a loss if it had. Goldman Sachs did not hold the underlying CDOs but rather had sold equivalent credit protection to its clients who held these positions; Goldman then purchased the corresponding value in protection from AIG to hedge against its own exposure in the event of  a default of the reference CDOs.  Accordingly, Goldman Sachs was obligated to pay its clients in full on the other side of the derivative transaction, and, if granted a haircut to FRBNY, it would have to realize that amount as a loss. 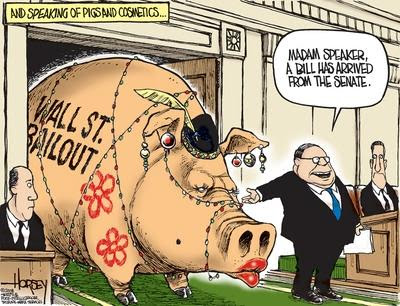 And then, the bailout of AIG would be what it really appeared. A bailout of Goldman Sachs. Who took that $8 billion and folded it over to bonus themselves $16 billion of taypayer largess.

I suppose it was then, a matter of National Security.

Because Goldman was the Treasury's bank!
Posted by Palmoni at 6:05 PM

It just gets worse and worse. Eventually the public will demand their pound of flesh for this.

That graphic was amazing. When you put it like that, hard to not be a conspiracy theorist.

That said if you can't beat 'em, join 'em. May buy some calls on GS if it drops any lower.

yeh I even sold my Goldman puts today

I've been surfing online more than 2 hours today, yet
I never found any interesting article like yours. It's pretty worth enough for me.
Personally, if all website owners and bloggers made
good content as you did, the internet will be much more useful than ever
before.

certainly like your website however you need to
check the spelling on several of your posts. Several of them are rife with spelling problems and I to find it
very troublesome to inform the reality nevertheless
I will definitely come back again.