"They buy suitcases for their suitcases" 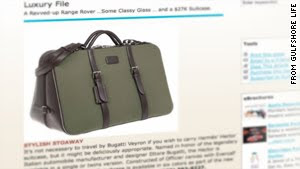 At first I thought it was. Last fall I was traveling through Naples, Florida, and a cover line on a glossy local magazine caught my eye.

The magazine was called Gulfshore Life, and the cover line said:

Perhaps, I thought, this was a teaser to a satirical story using literary exaggeration to whistle past the graveyard of America's fiscal hard times.

But when I flipped open the magazine, the feature seemed to be serious.

The $27,100 suitcase, the story said, was sold by Hermès, the luxury retailer, which has a store in Naples. The suitcase was called the Hector, and was "constructed of Officier canvas with Evercalf calfskin."

I closed the magazine, but could not stop thinking about the suitcase. A suitcase is something that gets banged around. It sits out in the rain and snow on airport runways. Baggage handlers toss it roughly onto conveyer belts. Sometimes it gets lost on flights.

Weighty and important matters dominated the news. But there it was, always in the back of my mind: the suitcase, and the parallel world of wealth it represented. 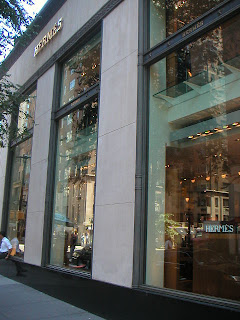 Over the holidays, I was in New York City. One morning I walked to the Hermès store at the corner of 62nd Street and Madison Avenue. I took a deep breath and walked in.

"Which bag specifically?" she said.

"You have more than one that costs that much?" I said.

"Why would someone spend that kind of money on a suitcase?" I said.

She looked around, as if to be certain no one was listening, then half-whispered:

"I use my Samsonite."

She said that the $27,100 suitcase was not, on that day, on floor display. I left New York, still mulling: How could a person take such a suitcase on a trip? It would be like putting a baggage tag on $27,100 in cash.

At Midway Airport in Chicago, I went in the slush and slop to Southwest Airlines' curbside baggage-check area to commiserate with my baggage-handler friends there. I told them the story.

I would like to report their response, but it was so cold outside, and they were so bundled up head to toe, that all I could discern was their muffled laughter.

In recent days I was in southwest Florida again. This time I went to the Hermès store there, in the elegant Waterside Shops outdoor mall.

She absolutely beamed, and I immediately realized she had mistaken my intentions.

The wattage of her smiled dimmed a bit. She said I would have to give her more information about the product; she said some specially made Hermès bags sold for $40,000 or $50,000. "The people who pay that much for a bag usually fly on jets," she said.

"Most people fly on jets," I said.

She gave me a don't-be-dense look.

"Oh," I said, surmising that, in these circles, "jets" was a synonym for "private jets."

Back in my hotel room, I called Hermès' U.S. corporate headquarters.

There, a spokeswoman, Bernice Kwok-Gabel, said that for many customers, only the best that money can buy will do. "They want the finest," she said. "No compromises." She said that for people who might spend $27,000 on a work of art, $27,000 for a suitcase is not excessive. "If they want it, the price is not a big concern."

She said that the $27,100 Hector suitcase is actually a twinned piece of luggage: two compartments carried by a single handle. For a customer on a tight budget, a single Hector compartment can be bought by itself.

I ended my quest where it began: at Gulfshore Life magazine, where I had seen the original mention. I called the editor-in-chief, David Sendler, to ask if he thought his readers had greeted the item about the suitcase with a shake of the head.

"Some probably did," he said. "But I'm sure there were others who saw it and thought: 'I'd like to have that bag.' We have a very high-demographic readership."

I will leave you with this thought. At that Hermès store in New York, I asked the clerk why someone would pay so much for a suitcase that would inevitably get scuffed and scratched in transit.

"Some people buy metal cases in which to enclose their suitcases," she said.

She saw the disbelief in my eyes, smiled, and said:

"They buy suitcases for their suitcases."
Posted by Palmoni at 10:19 AM

I was in texas this week and drove from dfw to aus and saw trucks carrying wind turbines!!! Maybe APWR but they are massive.

Was curios how we can get through all the broken charts? Just sit tight and wait?

I've been getting killed in HL down over 30 percent.