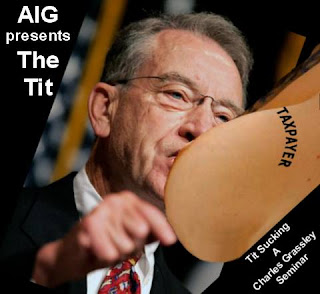 Barron's had a snippet on the TLGP:

You may not have heard of the TLGP, but it was one of myriad, alphabet-soup facilities set up in the rescue of the financial system. As Tim Backshall, head of research at Credit Derivatives Research, wrote in a note, "TARP was Nothing, TLGP is The Real Deal!" When Goldie's FDIC-backed TLGP bonds come due in 2012, it faces about a $1 billion jump in interest expense, by Backshall's estimates. JPMorgan Chase, meanwhile, would see an estimated $2 billion rise in interest expense when the TLGP debt rolls off in 2012. That's because the bonds pay on average of just about 0.66%.

It's just not AIG that's still sucking the taxpayer's tit!
Posted by Palmoni at 9:52 AM

Good Lord, my eyes! That photo was uncalled for..

So you think this is a correction/dip buying opportunity or the start of something bigger?