"I am not shy when I see opportunity"

Or at least that's what Phil Falcone said on October 5, 2008 after he made a few billion illegally shorting Wachovia into the ground.

So Falcone swung for the fences and sold the 117 million shares.


"That was the largest short position I have ever seen on the street," one investor in Falcone's fund told The Post.


"I am not shy when I see opportunity," Falcone told The Post last week, after being told of the investor's comment.
Today we find out the the SEC is finally looking into Harbringer's illegal short of Wachovia.

It looks like the SEC is not shy when they see opportunity also! 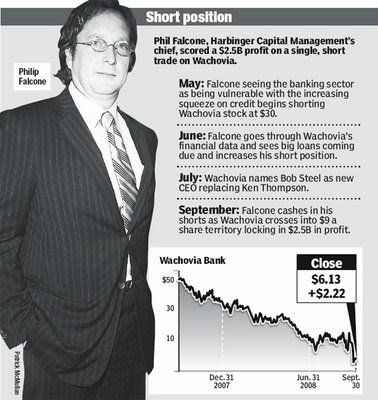 So here's the road map for their prosecution! Courtesy of Wall Street Manna over two years ago!

Now I wrote about Harbinger the day before he and Soros and Simons were called up on Capital Hill.
http://aaronandmoses.blogspot.com/2008/11/santelli-tells-world-about-paulsons.html

Philip Falcone, of New York-based Harbinger Capital, rang up the incredible profit by shorting a whopping 117 million Wachovia shares at $30 back in May after his top analyst and investment chief pointed out problems with the Charlotte, N.C.-based bank's mega-billion dollar Option ARM loan portfolio.
http://www.nypost.com/seven/10052008/business/falcones_wachovia_short_bet_132254.htm

You even have a nice picture of him!

The short interest only increased 3 million shares the next two weeks when he supposedly put on this position.

So where were these shorted shares? Why didn't they show up?

Now if we can't find his shares, that he shorted, on a $2.5 billion dollar trade in the short interest figures, how are we going to find all these smaller trades?

Oh, but rest assured, the gumshoes at the SEC are hard at work. During the week of his testimony, the SEC charged some trading firm, with violating the then-existing "uptick" rule by selling stock to depress prices and then buy back the stock.
http://complianceinsights.typepad.com/what_went_wrong/2008/11/sec-charges-day-traders-in-short-selling-scheme.html

These traders supposedly made $2.4 million.

How long do you think it will take, for all these shorts to get bullish, and to unwind some of their bets? And if Cramer and Buffett were taken to task this week, what will happen to these guys who have profited from the same collapse of the institutions that have hurt Main Street?

So we get their metamorphis into the good guys. But first, they need to clean up their books.

So now you know why the TALF was postponed a few days. It wasn't that these hedge funds didn't want to buy the Government's merchandise.

They just didn't want the Government looking over their books!

And then JPM gets to use it's asymmetrical information advantage with the Fed's blessing!

And you still want to believe that these Investment banks won't be able to attract capital at competitive rates without FDIC backing?

This week we had Obama, Summers, Pandrit, Dimon and Lewis pumping the economy.

Sunday night, Bernanke's coming to 60 Minutes, and he'll be flexing the Fed's muscle to the nation, and giving his version of the pump.

And if that doesn't work, the Fed's next step will be to use handcuffs.
Posted by Palmoni at 10:28 AM 12 comments:

He jumps around so much that it would even keep Veep Biden awake!

Watch Joe's neck snap at the end of his little nap!

Wrong way Prechter is at it again 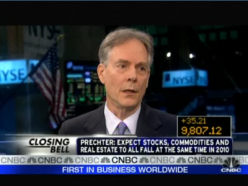 Prechter is at it again--trying to sell some more subscriptions--so he comes out with another headline--because '"Oh My" we are ready to collapse...

And he, like Nouriel Roubini, is littering email boxes with spam, hoping someone is stupid enough to get sucked in by these one way prophets, and shell out some shekels for some bearish drivel... 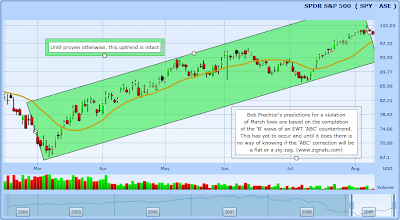 Because Prechter, now for two years, has said we are ready to roll over and take out 666.

Just like last September when he said the Dow was heading to 1,000! Right before it resumed it's uptrend!

Will the Market Reward That Much "Unbending Loyalty"?

The public's commitment to US equities is starting to resemble a country western song. Investors have chosen to "stand by their stocks," come what may in global politics and finance, including:
But like the lyric says: Been down so long so low, there's only one place left to go -- up. The rally in the major indexes from mid-March has appeared to stoke "worst-is-over" sighs of relief.
Will the market reward this much unbending loyalty? The just-published Elliott Wave Financial Forecast reveals the answer. Both in the US and beyond, our analysis considers:
Posted by Palmoni at 7:58 AM 1 comment: