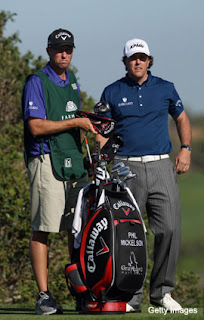 Here's that story! And let's see Joe Kernen spin this. Phil's been hanging out with Barclay's President Robert Diamond too much!

The PGA Tour season's not even a month old, and we've already got our first major controversy. And Phil Mickelson has played exactly 18 holes, and he's smack-dab in the middle of it.

At issue are new club groove rules that went into effect on Jan. 1. Long story short: golfers were using specially-cut grooves on their clubs to spin the ball more sharply and play more effectively out of the rough; the penalty for putting a shot into the rough was thus minimized. So the USGA and the Royal & Ancient, two of golf's major governing bodies, decreed that such grooves were illegal and could not be used on Tour starting this year. (For more detail, check our handy guide to the new rules right here.)

However, golfers are expert at wiggling their way out of tough situations, and they discovered that a lawsuit Ping filed against the PGA Tour and the USGA way back in 1993 exempted wedges made before 1990 from the new rules. (Don't try to figure it out, just accept it.) Lo and behold, what should turn up in the bags of golfers like John Daly and Phil Mickelson but some vintage Ping Eye 2 wedges, clubs that are old enough to legally drink.

The golfers' decision to squeeze through the loophole hasn't sat well with many of their peers. "It's cheating, and I'm appalled Phil has put [the grandfathered club] into play," Scott McCarron, a three-time Tour winner, told the San Francisco Chronicle."All those guys should be ashamed of themselves for doing that ... As one of our premier players, (Mickelson) should be one of the guys who steps up and says this is wrong."
Posted by Palmoni at 4:46 PM

Woods has used every loophole in the rulebook since he started.
For ex. he enlisted several men to move a "movable obstruction " in the form of a boulder in front of his ball.

Or the tournament with Furyk where woods claimed an obstruction in his line, an anchor cable some 150 yards out from his ball in the rough, to garner a much improved line via a free drop.
I remember reading how after the round, furyk walked over to inspect this obstruction which had several large trees before it even came into play.

So screw mccarron. If its legal, its legal and use it all you want.

If so many players are against using these clubs, why not just change the rule and end the controversy?