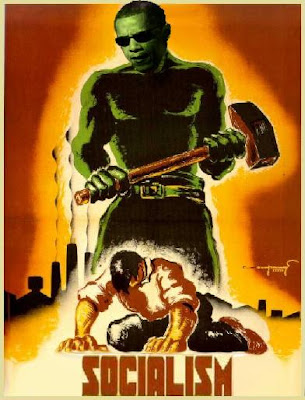 Everyone knows it but Goldman, who Cramer says, "Got it right."

Well, they're getting it right back today. Let's see if they can take a punch. And let's see how much they can take.

The public knows this, but like OJ, who went golfing while collecting pension, Goldman acted like they were innocent of any crime.

What bailout? We didn't need it? We weren't scared when our stock was $47. We knew the value of our franchise. We don't front run our clients. We don't short what we sell. We're just a principal on the trade. It's our prowess. It's our risk management models.

All kinds of horsesh*t and all kind of lies.

And then, today Goldman reached their hand into the bonus jar.  It was like OJ going to Vegas to pick up his memorabilia!

So today, Obama put the hammer on Goldman.

And Wall Street is scared out of its wits.

You don't think so? Did you see his speech? Obama was against every way that Goldman milked the system!

"Direct conflicts" "sponsor hedge funds" "prop desks" "private equity" "while being banked by the American people" "army of industry lobbyists" "You want a fight, it's a fight I'm ready to have!" "soaring profits" "obscene bonuses."

Obama just gave back hope to the people!

And did any of you see Timothy Geithner's pasty white, scared face at Obama's press conference? Today, he should of put on some of his orange tan cream. He was freaking out.

Obama knows the political winds that are blowing, and he put Goldman in his sights. And it will hurt the market, but the power needs to be shifted from Wall Street to Main Street. Because Obama isn't going to be the bank's patsy. That job was Geithner's, and now he's next to go.

Anybody that owns Goldman Sachs should be gone. They shouldn't own a share.

Take your Goldman money off the table and take it instead to Vegas, where at least you'll have a play.

The public wants Goldman's hide, and they'll get it from Bo.

so Merithy Whitney was right...lol...

so what now? do we just hold cash?

The mass. vote scared the h*ll out of the democrats. They could not hold a kennedy seat, egad!! Think what Nov. holds for many.

Now they will turn on the banks who slapped the faces of their political supporters with multibillion dollar bonuses.

Things could get real ugly. They bought into the concept of too big to fail and acted accordingly. Maybe its alright to fail a few more. No one is indespensible.

Banks will respond with the realization of some monster losses being carried at near par on the books. Its the only way to silence the anger.

Hedge your longs with shorts on GS and these big banks.

I can't say it any better than the comment below you

So the banks hubris finally caught up with them. "Banks cannot operate hedge or private equity funds with tax payer money" That's huge and it means Goldman will have to revert from being a bank holding co.

While I like Obama growing some balls, it means the market will be trashed out of protest. Oh well it was fun while it lasted :P

so that means that all the banks need to spin off their other buisiness...ie...BAC needs to sell off Merril?

so are the Bears back in control?

the repurcussions of this won't be over in one day.. but if you didn't hedge the Feb 140 puts at Goldman ar at 1.25 why won't they be 3 tomorrow?

Harsh words but exactly right. I think most people are feeling what you just expressed and this "correction" ain't done yet.

Puts on banks look a tad expensive though.