Obama "spins" himself. Here's what he said in an interview with Diane Sawyer which will air tonight:

How does a really good one-term president not get re-elected?

Here's part of the interview:

SAWYER: But a year ago, you said the first item on the agenda, a year ago, jobs.
OBAMA: Absolutely.
SAWYER: Painted a picture of jobs from coast to...
OBAMA: Well, now, Diane, I think that's not fair. Here's what I said...
SAWYER: A hope for jobs, at least, infrastructure...
OBAMA: Here's what I said, was that our number one priority was stopping the economic contraction and putting people back to work. Now, we have stopped the economic contraction. The economy is growing again, and we did create or save several million of jobs. That's not my opinion. That's the opinion of conservative economists as well as liberal economists, was that the Recovery Act, which is a combination of tax cuts, infrastructure improvements, helping states stabilize their budgets -- all those things helped to lessen the fall. But we've still lost 7 million jobs. So, I understand why the American people, their attitude is not "It could have been worse." Their attitude is, "How do we make sure we keep on making it better?". And that's what we'll be talking about on Wednesday.
SAWYER: New proposal? Something surprising?

Which is why we have this latest from Gallup:

65% difference is the highest rate of "polarization" for a first year President. 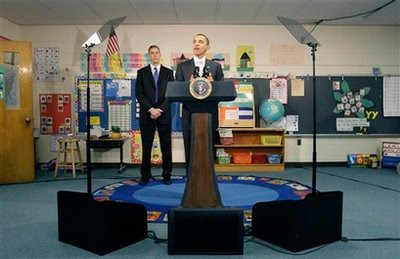 But this Prez, and his Administration,  fails elementary school math, on how they count jobs.

Maybe that's why he used a teleprompter before he talked to the Graham Road Elementary School kids in Virginia!
Posted by Palmoni at 7:09 PM

Telepromter to talk to kids?? That's just sad. I think he becomes a one term prez, but I do like his math!

i'm traveling this week...in dfw...do you think the correction is over? i was on the plane most of the day and the action looked confusing...

correction is over! everyone is 5%ish and that's just what we got