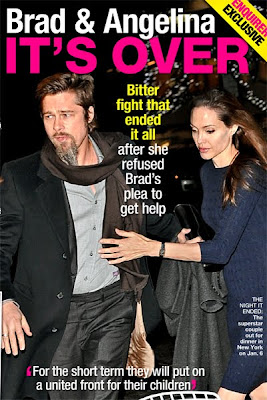 Once again The Enquirer hits it first. They had this cover a few weeks ago. Angie's therapy will be to adopt another child. Brad's beard did the trick--he can now spoke rebound joints with Jennifer Aniston.

Why do you think she had such a smile at the Golden Globes! 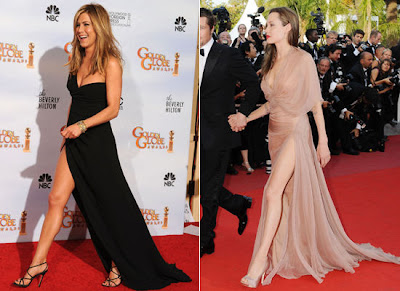 After a bitter spat that prompted her and Brad Pitt to pull the plug on their once-committed relationship, she's packing up for an extended stay in Europe, and will adopt another child, sources say.

"Angie is throwing her energy into building a life apart from Brad," an insider told The ENQUIRER.

"Angie is already packing her and the kids' clothes and personal effects for an extended stay in Europe while she and Brad work out child custody arrangements and the financial terms of their split."

The 34-year-old mother of six is set to begin production soon on the spy thriller The Tourist which will film in Prague and Venice. And she'll rely on her brother, 36-year-old actor James, to help during the adoption process, said the source.

"Angie's strategy is to decompress for a while at the couple's leased estate in southern France," said the insider.

As The ENQUIRER recently reported, Brad and Angelina's nearly five-year relationship buckled under months of stress, including a failed suicide attempt by Angelina and a frightening collapse after the 5-foot-7 beauty's weight dipped to a stick-thin 104 pounds. 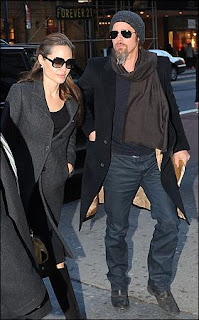 In December, after Angelina temporarily kicked the 46-year-old Inglorious Basterds star out of their Los Angeles home because of his boozing, she physically attacked him when he made a cheating confession about ex-wife Jennifer Aniston.

Soon after, during a fight over dinner on Jan. 6 in New York City, Angie rejected Brad's ultimatum that she seek professional treatment for her emotional demons and physical issues.

"Angelina feels her life with Brad has been toxic. She's looking forward to a new beginning," continued the insider. The world's most famous couple legally agreed how to divide their fortune and who gets custody of their six kids.

The megastars have agreed to equally divide their vast fortune - and to SHARE their six children.

Dynamite legal papers secretly signed by the couple this month detail how all their homes and assets will be carved up.

The agreement gives them joint custody of the kids - but all six will actually live full-time with their mum.

Preparations for a split began in early December when "Brangelina" visited a top Los Angeles divorce firm to begin thrashing out the deal.

An announcement of their separation is expected to be made soon - ending months of speculation that the five-year relationship is on the rocks.

A source told the News of the World: "The document was signed in early January. Both Brad and Angelina had signed it.

"The contract was like a tailor-made version of a pre-nuptial agreement except for an unmarried couple's split.

"It seemed clear they want the world to know they'll both play a part in the upbringing of the children.

"But Angelina will actually be the one who lives with them full-time."

The divorce lawyer they consulted is based in Beverly Hills and has worked on a string of celeb divorces and splits. He is widely regarded as "the best in the business".

Our source added: "There's no date for when the contract would come into effect.

"But the paperwork is already organised for a break- up - and for it to be as unmessy for them as possible. It is clear it's a case of when they break up rather than if."

The troubled couple have not been photographed together in public in recent days. On Friday night, Brad, 46, was snapped backstage at the Hope For Haiti concert in Los Angeles without Angelina, 34.

His ex-wife Jennifer Aniston was there - although not with him. 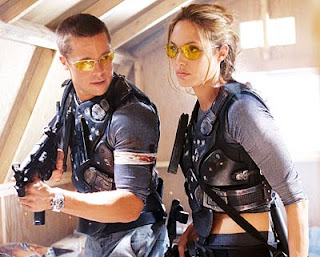 "Brangelina" fell for each other when they played a warring couple in Mr and Mrs Smith in 2004. They have three adopted children (Maddox, eight, Pax, six, and Zahara, five), and three biological kids (Shiloh, three, and 17- month-old twins Knox and Vivienne).

Both stars have been through high- profile splits before. Brad shocked the world when he split from Hollywood golden girl Jennifer, 40, in January 2005. They had been married for 4½ years.

He was first photographed with Oscar-winner Angelina three months after the split. Before Jen, he was engaged to actress Gwyneth Paltrow.

Jolie has been divorced twice - from Monster's Ball star Billy Bob Thornton in 2003, and Trainspotting actor Johnny Lee Miller in 1999.

Her joint fortune with Brad of $322 million (£205 million) includes mansions in France, California and New Orleans. But rumours have been circulating for months that the couple's relationship is doomed.

Last week they failed to show at the Golden Globe Awards even though Brad's film Inglourious Basterds was up for a several gongs. 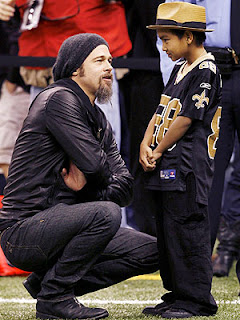 Instead he went to watch the American football team New Orleans Saints, while Changeling star Angelina stayed in California. Also last week, Pitt bought the mansion next door to the family's LA home for £800,000.

His pals Guy Ritchie and wife Madonna famously bought their next-door pad in London before their split so they could share living space with their kids but keep away from each another.

Earlier this month, Angelina was snapped looking tense with an unsmiling Brad in New York.

And last month she said fidelity was over-rated - and if she or Brad had an affair it would not be a problem.

She told German magazine Das Neue: "Neither Brad nor I have ever claimed that living together means to be chained together. We make sure that we never restrict each other. 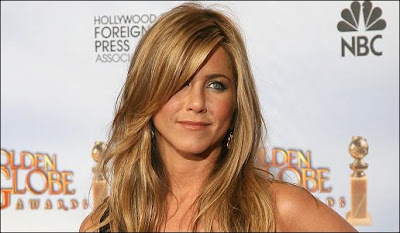 "I doubt that fidelity is absolutely essential for a relationship. It's worse to leave your partner and talk badly about him afterwards."

Angelina, whose new film Salt is due in British cinemas this summer, also said: "The sparks fly at home if the nice Brad fails to see that he's wrong and reacts in a defiant way.

"Then I can get so angry that I tear his shirt."

He said when the couple first met they had 20-HOUR sex sessions.

In his book Brangelina: Brad Pitt and Angelina Jolie, Ian writes: "Brad had never had such incredible sex.

"My sources say that they sometimes spent 18 to 20 hours a day in bed. But sex eventually wears off.

"She has brought a lot of good things to him - the children, for example.

"But he didn't know what he was getting into, and that's why I think they're going to split."

We asked Brad, Angelina and the legal firm for their comments but they did not respond.
Posted by Palmoni at 8:45 AM

Technology truly has become one with our daily lives, and I am fairly certain that we have passed the point of no return in our relationship with technology.

I don't mean this in a bad way, of course! Ethical concerns aside... I just hope that as memory gets cheaper, the possibility of uploading our memories onto a digital medium becomes a true reality. It's one of the things I really wish I could experience in my lifetime.