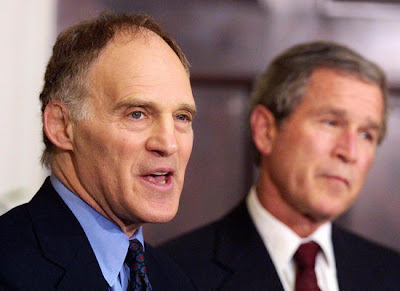 Stephen Friedman, was the chairman of the Board of Directors of the New York Fed when the decision to pay Goldman Sachs 100 cents on the dollar for their swaps with AIG was made. In May, when the WSJ disclosed that he had picked up 50,000 shares of Goldman Sachs after he knew this information back in November, he resigned. He kept his shares of Goldman, and he kept his profit.

He answered to no-one.

Representative Darrell Issa sent a letter asking why Freidman, who had this information before anyone else, bought 50,000 shares of Goldman Sachs when this "secret deal" was made.

We got the emails where the NY Fed told didn't want the details of the payments shown.

As a result of this transaction, the AIGFP counterparties received 100 percent of the par value of the Multi-Sector CDOs sold and the related CDS have been terminated. ML III has now acquired approximately $[62.1] billion in par amount of Multi-Sector CDOs and has aggregate liabilities resulting from its borrowings from the NY fed of approximately $[___] billion.E-mails from N.Y. Fed to A.I.G. to Not Disclose Counterparty Payments

We heard from the general counsel of the New York Fed:

"With respect to Steve's purchases of Goldman shares in December of 2008 and January of 2009, which have been the object of some attention lately, it is my view that these purchases did not violate any Federal Reserve statute, rule or policy."

We got the declassified phone logs from Politico regarding Treasury Secretary Timmy Geithner.

Timmy Geithner needed to tell Freidman the details of the Goldman Sachs bail-out by AIG.

Meanwhile, we find the the Federal Reserve Bank of NY, of which Timmy Geithner was heading, said the bailouts details of AIG were of national security status:

NEW YORK (Reuters) - U.S. securities regulators originally treated the New York Federal Reserve's bid to keep secret many of the details of the American International Group bailout like a request to protect matters of national security, according to emails obtained by Reuters.

The request to keep the details secret were made by the New York Federal Reserve -- a regulator that helped orchestrate the bailout -- and by the giant insurer itself, according to the emails.

The emails from early last year reveal that officials at the New York Fed were only comfortable with AIG submitting a critical bailout-related document to the U.S. Securities and Exchange Commission after getting assurances from the regulatory agency that "special security procedures" would be used to handle the document.

The SEC, according to an email sent by a New York Fed lawyer on January 13, 2009, agreed to limit the number of SEC employees who would review the document to just two and keep the document locked in a safe while the SEC considered AIG's confidentiality request.

"The New York Fed was orchestrating what can only be characterized as an extreme effort to ensure that details of the counterparty deal stayed secret. More and more it looks as if they would've kept the details of the deal secret indefinitely, it they could have." 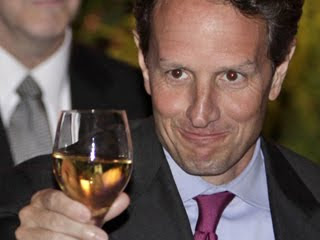 Except of course, if you were Stephen Freidman, and you're buying Goldman stock, and your tippee is Turbo Timmy, the orchestrator of the AIG and Goldman Sachs taxpayer bailout.