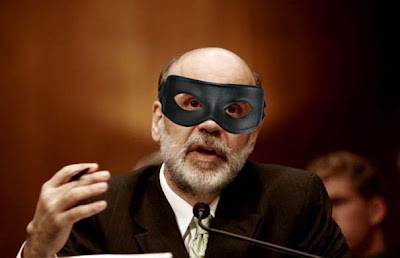 Bernarke says, if re-elected, he will be as transparent as possible. Really. The biggest side room, back door, buddy deal ever was AIG, and now the heat is getting hotter.

Delay the vote for Bernanke, and then we'll find out what really went on. This weekend, we were told Ben's nomination was a lock.

Why then, is the Prez still making calls to get the votes?

WSJ
Mr. Barofsky said he is also reviewing the Federal Reserve's cooperation with his office. Issues raised in recent weeks "call into question whether the government has been and is being as transparent as possible with the American people," he said in prepared remarks for a Wednesday hearing before the House Committee on Oversight and Government Reform.

The probe is likely to ratchet up the heat on the Federal Reserve, which lately has been under some of the most intense scrutiny from Congress it has ever faced. Chairman Ben Bernanke is the focus of a heated debate in the U.S. Senate over whether he should be confirmed to serve a second term as head of the central bank.

The Fed's New York office has been a main overseer of the U.S. bailout of AIG. Wednesday's hearing will include testimony from Treasury Secretary Timothy Geithner and the top lawyer from the Federal Reserve Bank of New York, which Mr. Geithner headed when AIG was first rescued.
Posted by Palmoni at 7:05 AM

Nice dispatch and this enter helped me alot in my college assignement. Gratefulness you seeking your information.

Brim over I acquiesce in but I contemplate the list inform should secure more info then it has.