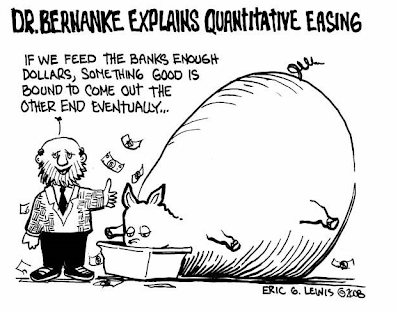 Now that Bernanke looks to be re-appointed--because heaven help us--if he wasn't--the world would collapse. Isn't that what Prez spokesman Joe Gibbs had to say?

How about Obama? Last week he was vilifying bankers when he was trying to get the masses in Mass to vote for Martha. This weekend, on the talk show circuit, he spent all his political capital backing the nation's banker.

And Krugman got yanked back in the party line quickly with his latest editorial: 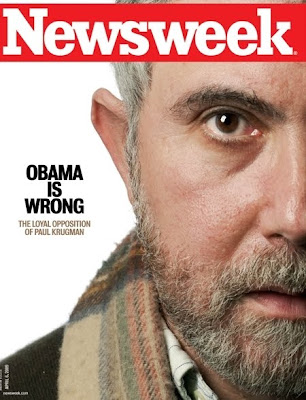 ....And then there’s unemployment. The economy may not have collapsed, but it’s in terrible shape, with job-seekers outnumbering job openings six to one. Nor does Mr. Bernanke expect any quick improvement: last month, while predicting that unemployment will fall, he conceded that the rate of decline will be “slower than we would like.” So what does he propose doing to create jobs?

Nothing. Mr. Bernanke has offered no hint that he feels the need to adopt policies that might bring unemployment down faster. Instead, he has responded to suggestions for further Fed action with boilerplate about “the anchoring of inflation expectations.” It’s harsh but true to say that he’s acting as if it’s Mission Accomplished now that the big banks have been rescued.

What happened here? My sense is that Mr. Bernanke, like so many people who work closely with the financial sector, has ended up seeing the world through bankers’ eyes. The same can be said about Timothy Geithner, the Treasury secretary, and Larry Summers, the Obama administration’s top economist. But they’re not up before the Senate, while Mr. Bernanke is...

Furthermore, policy decisions at the Fed are made by committee vote. And while Mr. Bernanke seems insufficiently concerned about unemployment and too concerned about inflation, many of his colleagues are worse. Replacing him with someone less established, with less ability to sway the internal discussion, could end up strengthening the hands of the inflation hawks and doing even more damage to job creation.

That’s not a ringing endorsement, but it’s the best I can do.

And if things get worse? Well, QE 2! Ask Goldman!
Goldman Sachs Research: FOMC- Pedal to the Metal
Posted by Palmoni at 8:13 AM