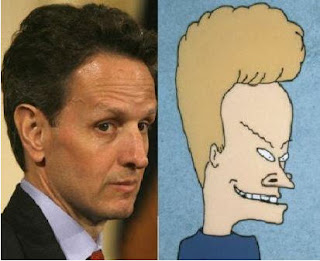 Why wait? Who needs this sniveling, Wall Street prick that is intent on screwing the taxpayer while he kisses Wall Street's ass?

Why is he even around?

Do we really need a liar, a thief, a snake, and a smarmy, self-absorbed, condescending elitist enraptured with his own self entitlement for Treasury Secretary, who is only interested in himself and his banker buddies, and not Main Street?

And do we really need a Treasury Secretary that wants to undermine his boss? 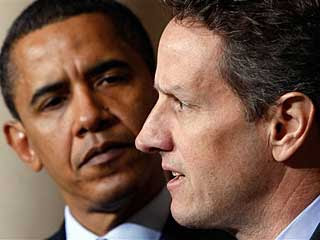 Even Krugman sees through Geithner's transparent ideology, as he continually attempts to defuse Obama, and assuage the street. Look at his blog today:

What did Geithner say?

Various news reports that Tim Geithner is privately opposed to the new Obama bank plan — which isn’t that much of a surprise, but he should not be talking about it (if he is). What we do have is this PBS interview, in which he certainly isn’t doing much to back the concept. The correct answer to “In essence are you saying that big banks need to be broken up” is “Yes”; add some qualifiers if necessary — “we’re not talking about a sudden disruption, but about new rules of the game, but the eventual goal is smaller banks that aren’t engaged in inappropriate activities” or something like that.

As it was, Geithner might as well have had a chyron underneath as he spoke, with the words DON’T WORRY, WE’RE NOT GOING TO TAKE ANY REAL ACTION. 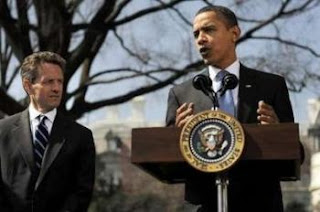 Remember those good ole days? When he was the "only man" that could do the job? 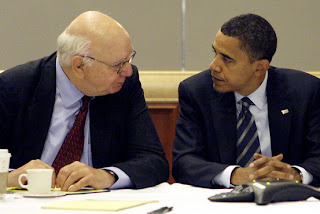 Remember Obama's transition team? Do you think he was buying Volcker here? Back then, he was still "dating" Tim. 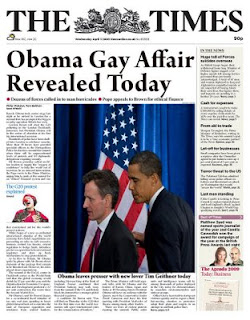 No-one understood why Obama stood behind Geithner, so they had to come up with their own humorous slant. And thow in a few puff pieces in the NY Times, about the new "yuppie" Treasury Secretary, that could overwhelm people with his brilliance.

The public always knew his brilliance was just a con. Now even Washington does. 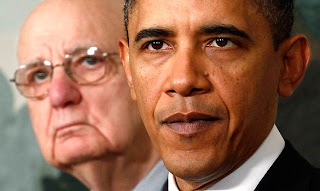 Yesterday, President Obama stood side to side with Volcker. Where was Timmy? In the "Volcker Plan?"

But Geithner isn't going to be this Administration's whipping boy. He's still trying to undermine the President.

So fire him. NOW!

If you need a reason to fire Geithner, and the traffic light on him is still yellow, and not yet red, then look at what you got right now.

So let's look at Geithner's fingers.

We know that Geithner's fingers are all over the AIG bailout, and they're all over every bank subsidy given to Wall Street. But the Treasury Secretary always seems to deny it. He now says  they didn't want to disclose the AIG payments, because it was actually 99.7 instead of 100 cents on the dollar.

Really? You buy that? That "brilliance" dressed up in a lie?

When Geithner last spoke before Congress, he had this strange orange glow on his face.  Geithner, didn't want to say it was his orange self tanner, so they said his face just reflected from the orange whiteboard.

Really? You buy that? 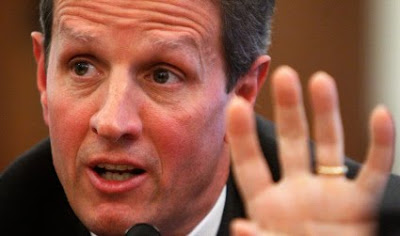 Well his fingertips were all over that also!

This time, Timmy didn't was his hands fast enough!

He doesn't matter if it's self tanner or a Wall Street bailout. If Geithner's fingers are in it, he'll lie about it!

If Obama really wants to save Bernanke's job, all he has to do is to get rid of Geithner.

It's the easiest way for your Administration to wash your hands from this mess, since Timmy won't clean his!
Posted by Palmoni at 12:33 PM

for some long term investments if the big boys need to unload some large and mid caps i assume it can hurt blue chippers like GE, AA, etc.

any recommendations? a few days ago you gave me GE, BAC, and MGM...just wondering if GE is a safe longer term by for my daughters investment account.

in college we talked about the VOLCKER RECESSION....i hope it doesn't repeat itself

GE will be fine. Only the bankers want us to believe that the economy is so fragile, that if we don't pander to the banks, everything will go to hell.

Bernanke will be confirmed--Volcker has no chance coming back as a Fed Chairman--the only bet worth taking is that Geithner will be gone.

But Obama has, for once the bankers scared--and they want to get his attention by selling to try and force his hand--and the johnny come lately shorts are tring to force things down, so we'll bounce good next week

That election in MA sure messed things up for everyone!!

Look at the 34 puts in COF they are only .60--If Obama's right hook can knock down Goldman, what do you think he can do to the most hated credit card conmpany in America?

And Paulson, who's been sucking COF's tit--has way to much financial exposure. Don't think he isn't getting out!!!

his fingertips are orange! wtf is with him?

he lies about self tanning? omg too funny

If securities rules applied to federal research grants, half the professors would be in jail! Obama's constituencies are universities, lawyers and unions. The universities are in it for the grants. Any Republican that votes money for universities is a traitor. Climategate is what happens when universities become addicted on federal grants for research, so they invent catastrophes like Y2K or global warming to extort a bigger fix of money.

UPI June 6, 1992 Sovern took over at Columbia after student protests of 1968 and New York's fiscal problems in the '70s resulted in less financial support for the school, a situation made more dire by recent federal government budget cuts. . . But Columbia will be looking for a new president in a period troubled by criticism for destroying records that were being reviewed for improprieties. Universities in general have been under greater scrutiny for how they charge the government for federally sponsored research.

Columbia's financial engineering graduates are just programmers pretending to be quants just like their industrial engineers are mostly actuaries.
No other academic department is more responsible for the destruction of both the American banking and automobile industries. Those Trotskyites never believed in American economics and just faked it. You don't see them saying anything how Japan collapsed form all their good advice and you don't see them admonishing their fellow reds in China for bad quality.

They love third world students because they don't expect the professors to work for the tuition! Surely You Are Joking Feynman p 215 "If I ask you a question during the lecture, afterwards everybody will be telling me, 'What are you wasting our time for in the class? We're trying to learn something. And you're stopping him by asking a question'."

Columbia Civil Engineering is controlled by the mafia, which is why all the famous professors whose surnames started with S up and left. Engineering is the only Columbia library that does not check id so mafia contractors can go without a trace.

Starting to see a real correction for once!