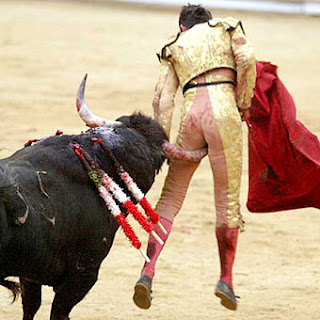 They're learning from Wall Street!

Spaniards are debating whether the sport should be kept alive. On March 17, a parliamentary committee in Catalonia heard arguments for and against a proposal to ban the sport in which bulls are stabbed, goaded and then killed.

An anti-bullfight group “Prou,” which means “enough” in the Catalan language, forced the debate after gathering 180,000 signatures. The legislative process to prohibit it could take two years, Prou spokesman Leonardo Anselmi said from Barcelona. In response, Esperanza Aguirre, president of the Madrid region, said March 4 she would begin actions to make bullfighting a protected part of its cultural heritage. 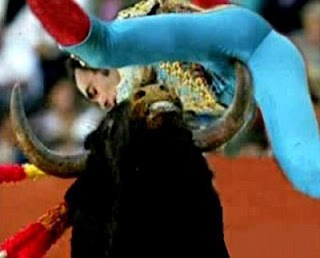 By the way--does that bull look familiar?

When every bear was telling you we were heading to sub 500 on the S&P, and Great depression II!
Posted by Palmoni at 11:09 PM

Merry Christmas! Let the new year will bring a lot of money

Thnx for the treat! But yeah Thnkx for spending the time to discuss this, I feel strongly about it and love reading more on this

You have a very good blog that the main thing a lot of interesting and useful!