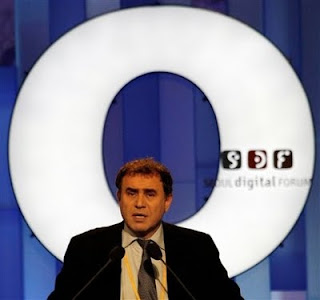 “The bond vigilantes are walking out on Greece, Spain, Portugal, the U.K. and Iceland,” Roubini, 52, said yesterday during a panel discussion on financial markets at the Milken Institute Global Conference in Beverly Hills, California. “Unfortunately in the U.S., the bond-market vigilantes are not walking out.”

So Roubini wants the US to go to hell in a handbasket, so his hell in the handbaskets predictions won't be so wrong!

But it's not just his stock market predictions that have been so wrong. Remember what he said about the dollar? When that carry trade would unwide?

But one day this bubble will burst, leading to the biggest co-ordinated asset bust ever: if factors lead the dollar to reverse and suddenly appreciate – as was seen in previous reversals, such as the yen-funded carry trade – the leveraged carry trade will have to be suddenly closed as investors cover their dollar shorts. A stampede will occur as closing long leveraged risky asset positions across all asset classes funded by dollar shorts triggers a co-ordinated collapse of all those risky assets – equities, commodities, emerging market asset classes and credit instruments.

How did that work out?

We had a massive rally in the dollar, yet stocks are a smidge from new highs? And double the 600 on the S&P he said that stocks were going to!!
Posted by Palmoni at 7:35 AM