Hussman is at it again

Oh My! John Hussman the alarmist! Oh My!

I noted last week that at current valuations, the S&P 500 is priced to deliver a total return of only about 5.7% annually over the coming decade...We certainly would have achieved better returns over the past year had I ignored the risk of further credit risks as investors, in hindsight, have done.

I have a couple words to all those folk, who are so fearful, are so afraid, are so chicken, are so scared of their own shadow, or the shadow inventory of homes, who still can't come to grips with the new reality that now besets them--- that we were in a massive bull market! Now I know these folk are so much smarter than the rest of us, are so much more erudite, and they are paternalistic and condescending on the minions of the masses who believe otherwise, who don't heed their proselytizing siren call of doom, and believe instead the entrepreneurial spirit of the American people. I have a few words for those with their PHD's, dressed up in suits, and pimping out the economics they learned as a professor; and I will even couch those words in terminolgy, so the uneducated layperson, of who these folk lord themselves over, will be even able to understand.

Because--didn't we hear this in January? You can read about it here. Then John was comparing our market to Lenin! Now he warns us again, and again....

The only bottoms up, top down approach that you should be checking out, is the one alongside this 65 Caddie Deville Convertible. 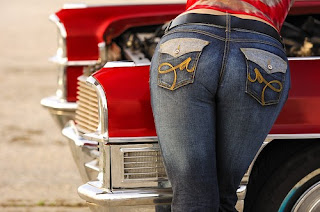 And toss Hussman's analysis out!
Posted by Palmoni at 11:28 PM

Oh My! I didn't know you could become an expert in bad calls.

I really don't understand though. They could take a long position, give information that's at least somewhat less biased, and ride the wave of the market.