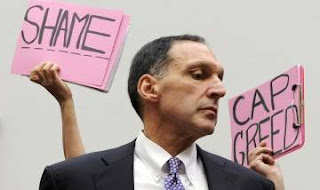 Remember how Jesse James put Tiger's mistress stories on the back burner? Today, Goldman can thank Dick Fuld, and his faulty recollection, as the old Repo 105, was brought to the forefront once again.

On Repo 105 transactions Dick Fuld had this to say:

"absolutely no recollection whatsoever hearing about Repo 105 transactions while I was CEO of Lehman." 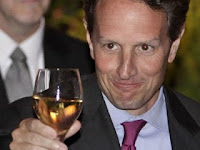 Treasury Secretary Geithner said, "did not recall being aware of Repo 105."

The counsel of the NY Fed, Thomas Baxter, "did not recall this being an issue linked to Lehman specifically."

“Jan Voigts, who was an examining officer in FRBNY’s Bank Supervision Department, had no knowledge of Lehman removing assets from its balance sheet at or near quarter-end via a repo trade treated as a true sale under a United Kingdom opinion letter. Arthur Angulo, who was a senior vice president in FRBNY’s Bank Supervision Department, likewise was unaware that Lehman engaged in Repo transactions.

Ben Bernanke said, "The Federal Reserve was not Lehman's supervisor...." and the Fed's employees inside Lehman "had no authority to regulate Lehman's disclosure, capital, risk management, or other business activities."

No American accounting firm would sign of on the Repo 105, so Lehman had to put it in English law and then disclose this:

“This opinion is limited to English law as applied by the English courts and is given on the basis that it will be governed by and construed in accordance with English law.”

And what does Linklaters do? According to their website:

The leading global corporations and financial institutions trust Linklaters with their most important and challenging legal assignments.

They cover-up your cheating with legalese and disclosure! 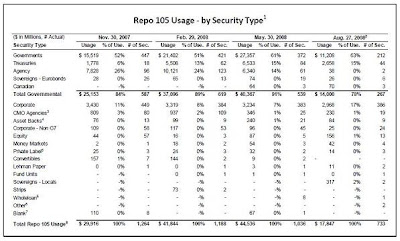 $29 billion, $41 billion, $44 billion and $17 billion, yet no one recalls? Not Bernanke, not Geithner, not Fuld, not anyone on the FRBNY? No -one knows where collectively $131 billion was moved in the last year of Lehman?

And coincidentally, the less the gross amount moved into the REPO 105, the greater amount of lower rated  assets!

In other words, Lehman progressively gamed the system.

Yet no one remembered!
Posted by Palmoni at 6:30 PM

[url=http://www.upmichaelkorsoutlet.com/]www.upmichaelkorsoutlet.com[/url] http://www.upmichaelkorsoutlet.com
You can locate tens of millions of diverse purses to make a decision on from, but if you're browsing for a modern, fashionable and large high quality handbag you have to definitely ponder a michael kors outlet bags . Finally, your target audience should be defined.Many companies will place their insignia on the totes and hand them out during promotions. This bag can brighten up any fall outfit. Attempted to avoid weird pseudo-jealous woman for the rest of the evening, but she kept. The awesome issue about tote bags is all the application they can be utilised for.It's defeating, for sure, to step on that scale and see how much I have back tracked. If you think the briefcase is too serious, you can try to carry both a briefcase and a messenger bag which can reflect the female style. In the form of liquid with no nutritional value.These handbags have been created trying to keep an eye on luxurious although steering clear of the ostentatious. If you have any concerns about your own health or the health of your child, you should always consult with a physician or other healthcare professional.

Valuable information. Lucky me I found your web site accidentally, and I
am stunned why this accident did not happened earlier!