The Chinman from China will sell advertising space to finance operation 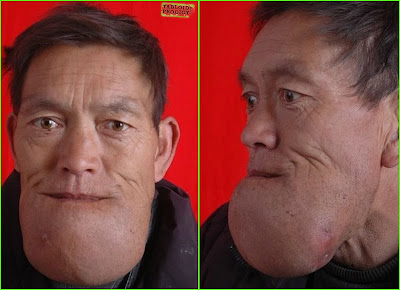 Down in the mouth Chang Du is offering to sell advertising space on his giant chin in a bid to raise cash for an op to remove it for good.

Du, 47, from Lishuguo, central China, says the giant basketball-sized swelling started as a tiny pimple inside his mouth just five years ago.

Now Du is trying to raise 5,000 GBP for an operation to restore his chin to normal size by offering it to advertisers for sponsorship.

"I am normally a shy man and stay indoors most of the time because I don't want to frighten people. But without money I can't get this operation so I will do or promote anything to get it," he explained.

Maybe he got the idea after he heard the rumor that Goldman, in an SEC settlement, was going to buy ad space on unemployed Jonah Falcon.

Just so everyone will know they are getting screwed!
Posted by Palmoni at 7:50 PM