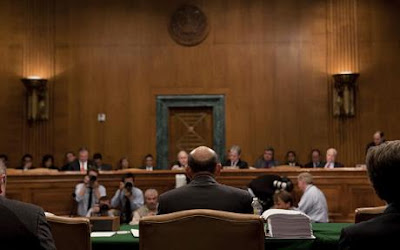 The hearing today, showed that Goldman, are at best, just skilled liars, and at worst, just hopelessly conflicted criminals.

The tinfoil hat folks were right. Goldman is just a giant squid, trying to suck out thelife and money out of anyone that comes in contact with them.

Goldman, supposedly with all the best and the brightest people in the world, all seem to suffer from recollection and memory problems, and all the while, working in isolation at Goldman!

And even Blankfein, supposedly didn't even know if Goldman has a SIV!

It is obvious that Goldman needs clients to trade order flow against, and that was apparent from the testimony today. They are just a big hedge fund, screwing over as much people as possible while staying lawyered and disclosured up.

All the folks that said Goldman were crooks, were right. Does Goldman, as a firm, really even need to exist?

This is the most storied firm in Wall Street? They are so storied that they can't even tell you if a deal "is shitty" even though the whole world knows it; nor can they even tell you if they would act in the best interest of the clients?

Today, the curtain was pulled away from Goldman. Today, you saw Oz. In Toto!

The veneer of respectability that Goldman had, was such a flimsy facade, and so inconsequential, that it was ripped away by Congressman!

Who for the most apart, didn't even understand the issues!
Posted by Palmoni at 3:06 AM