The Heartland is getting back to work! 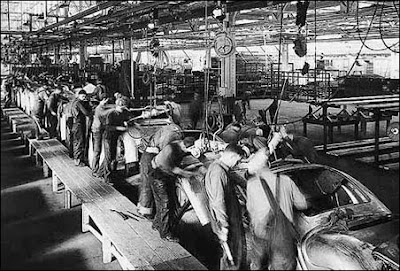 WSJ
FLORA, Ill.—A year after the U.S. government swooped in to rescue two crippled auto giants, the car business is showing signs of life again—and so are local economies across the heartland that depend on it.

As soon as General Motors Co. and Chrysler Group LLC finished racing into and out of bankruptcy court last fall, orders for headlamps and other car parts began streaming back to two factories here in this southern Illinois hamlet. The factories quickly re-hired about 400 of their 550 laid-off workers, giving Flora, Pop. 4,772, a big shot in the arm.

Local businesses are perking up. The Best Western just outside town occasionally fills all 41 of its rooms again. And shoppers are less scarce in Joe Etchison's appliance store. "Last year, people were sticking with the basics and skipping the stainless-steel refrigerators," he said, walking his downtown showroom trailed by Taz, his dog. People have "figured out the world has not ended."

Similar scenes are playing out across the Midwest, where the speedy stabilization of GM and Chrysler appears to have helped towns tied to the auto industry to get back on their feet more quickly than they may have otherwise.
Posted by Palmoni at 8:52 AM

is AXL a good play? anything else that might be worth a look?

I like AXL, but I'm really not doing too much today.

But in regards to the market--look at the restaurant stocks, they went parabolic, and now they seem to be rolling over.

Look at Goldman--why would they "settle?" Because they have so much dirt besisdes this is why!

The Casinos? Gosh they look extended. Heavy industry JOYG, BUCY they have pulled back, they look like they have distribution--

The market is showing cracks, and I'm not playing any of the high fliers.

Let's look at housing. Has that really turned? Why are stocks going up so much--because everyone knows you can play hot potato and sell in an instant--so the zero rates help that you can easily dump...You still can't do that in housing.

Now if you are an institutional investor, and you want to sell--isn't liquidating your giant position in stocks like moving a house?

You can have a small pullback, and a lot of stocks have so much air on the charts that they can come down harder than you would suspect.

And what they do, is they come down, to just the point where they are rolling over.

Last night, I was with a bunch of rich out of touch dudes, and they were all talking how the economy was so great, blah blah blah, and then, I talked to this other guy, who got it.

He looked at me and said--we have 22 foreclosures in my building. I'm upside down on my place by half. What's going to happen when all these people have to start paying for housing?

I told him--you got it--you understand--those other guys don't The underpinnings of the economy aren't as strong as people believe. 3.2% Q1 GDP after this recession? With all the stimulus? R U kidding me?

The stock market is the Government's only game in town, until the real economy turns. We have a turn in the auto industry because cars on the road are falling apart.

But will job creation offset the foreclosure displacement?

If the banks get it tohgether like FITB in regarding loan modifications, then it is yes. But these NY banks, who now think they can muscle everyone out in foreclosure because the economy and the housing ,market is that strong--well I don't know if that is the bet you make right now.

So it would be best if we build a bit of a base here, while they take down the banks. If that happens maybe forebearance can go through the economy just a bit longer, until job creation kicks in, and then, we can go off to the races.

But remember, Wall Street is prone to panic, and one thing they are afraid of more than anything else, is the Feds looking over their business.

Don't think there's a lot that just want to close up shop, take their money, and go to the South of France, and indulge themselves with Russian hookers.

Of course, I'm being overly dramatic, but I'd be happier if things would pull in.

And soon,--hopefully we wil see the folks at Goldman, who testified last year, that they were never concerned when the price of their stock was falling.

hmmm Let's see. Al we know is that Goldman made about 1.2 billion in the asset biz, another billion in underwriting etc, and 17 billion trading against their clients.

It would be nice to see if Goldman got some of their own medicine--in a perfect world!

But that might be just asking for too much!

thanks for your opinion...let us know when you think it's time to jump back in a little...i just took small profits on MPG for now....trying to decide on HWD...holding PRGN and APWR and HL

I have not understood this idiocy for some time.

Its best, anything goes earnings of '06 were 21 bil. But now the co is half its old size, half as much leverage and 3 times the stock float.

Of course its David Tepper, the genius. Tepper bought it, it must be a big winner.
I think that was the big lecture I heard a while back. Tepper bought it, hes a genius and the reasoning bears are just dumb. Don't they know there is pe expansion for all this trash??

I don't think I'm as bearish as you on housing for the simple reason many areas are priced significantly below the cost of new.

Here in Michishit, my golfing buddies talked about how the assessed value of their homes is way below the cost to build. The DDS in the group had his home valued below 200 k when it cost him 350 back in '02 to build it new and add on all the extras like landscaping and basement finishing.

So we concluded there can only be two possibilities: 1) no houses will ever be built in Mi. again or 2) prices have to recover to at least cost. Who would buy a new home at 220k and have it instantly valued 100k lower?
No one.

Add into that the normal decline of housing stock and there is a shortage of decent homes. Detroit for ex has about 5k houses abandoned and destroyed each year. Thats alot less housing available each year with no new construction.
This kind of underproduction stuff isn't sustainable. Supply and demand has to exhibit itself in prices.

Pal - give us some dirt on your fav - GS

whydidibuy - if $350k is true replacement cost then you would buy everything below that...but the thing is it might no longer cost you $350k to build that house that cost $200k...who cares about some of the extras....but focus on the land value and cost to build that house today and that's where you're getting $200k...without population growth it will stay down.

But at a party tonite!

anon, try telling that to the insurance co.

The DDS questioned his 400k amount the insurance co placed as a replacement cost.
They said the current prices of homes were not indicative of replacement cost. He had to accept the 400k coverage.