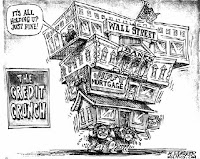 Major banks have masked their risk levels in the past five quarters by temporarily lowering their debt just before reporting it to the public, according to data from the Federal Reserve Bank of New York.

A group of 18 banks—which includes Goldman Sachs Group Inc., Morgan Stanley, J.P. Morgan Chase & Co., Bank of America Corp. and Citigroup Inc.—understated the debt levels used to fund securities trades by lowering them an average of 42% at the end of each of the past five quarterly periods, the data show. The banks, which publicly release debt data each quarter, then boosted the debt levels in the middle of successive quarters....

That practice, while legal, can give investors a skewed impression of the level of risk that financial firms are taking the vast majority of the time.

"You want your leverage to look better at quarter-end than it actually was during the quarter, to suggest that you're taking less risk," says William Tanona, a former Goldman analyst who now heads U.S. financials research at Collins Stewart, a U.K. investment bank.

Though some banks privately confirm that they temporarily reduce their borrowings at quarter's end, representatives at Goldman, Morgan Stanley, J.P. Morgan and Citigroup declined to comment specifically on the New York Fed data. Some noted that their firm's financial filings include language saying borrowing levels can fluctuate during the quarter.
-------
Less than one month ago, Goldman Sachs was telling us this:

WSJ
Goldman Sachs Group Inc. (GS) said Friday that it has never used a transaction known as Repo 105. The examiner investigating the collapse of Lehman Brothers Holdings Inc. (LEHMQ) said Repo 105 used a clause in accounting rules to classify repos as sales, even though Lehman was still obliged to repurchase the assets at a later date. That meant the assets disappeared from the balance sheet, and Lehman could use the cash it received to temporarily pay down other liabilities. This made Lehman look less leveraged than it actually was. "Goldman Sachs has never used this transaction," a spokesman for the investment bank said in an email to MarketWatch.

I guess they just call it something else.
Posted by Palmoni at 4:46 AM

It's nice to see some MSM finally catch on. Now do we think they'll expose the fact that many of the States and Our Federal gov are complicit?