Bear Sterns: The Goldman/Paulson deal was even too unethical for us 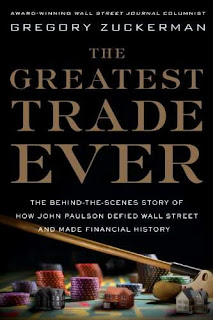 Gregory Zuckerman's immaculately reported book, The Greatest Trade Ever, won't be surprised: On Page 179, Zuckerman describes Paulson's extensive meetings with banks including Goldman, Bear Stearns, and Deutsche Bank to "ask if they could create CDOs that Paulson & Co. could essentially bet against. Ironically, it was Bear Stearns that rejected the offer: "[Bear Stearns trader Scott Eichel] worried that Paulson would want especially ugly mortgages for the CDOs, like a bettor asking a football owner to bench a star quarterback to improve the odds of his wager against the team ... he felt it would be improper." Eichel told Zuckerman, " 'It didn't pass our ethics standards; it was a reputation issue, and it didn't pass our moral compass.' "

(And how many millions again did Bill Bennett lose at casinos, because he couldn't rig the odds?)

How about Paulson's moral compass?


Paulson felt unburdened by any moral compass. (Of course not. He aleady fixed the odds. He wasn't gambling!) Though he had made clear that the CDOs should be stuffed with only risky slices of debt, Paulson accepted no personal responsibility, claiming “it was a negotiation; we threw out some names, they threw out some names, but the bankers ultimately picked the collateral. We didn’t create the securities, we never sold the securities to investors…”

But here's the real blockbuster. Abacus wasn't just any old mortgage-backed security. It was one of a toxic group that nearly brought down insurance giant AIG, as the New York Times pointed out last December. Goldman Sachs sold credit-default swaps to Paulson, according to the SEC. That left Goldman holding the risk on Abacus. According to a nice breakdown by the Wall Street Journal this week, here's how Goldman handled it: "Goldman bought credit-default swaps from AIG to hedge the securities firm's positions in some of the [Abacus] pools. When many subprime borrowers began defaulting on their loans in 2007 and 2008, the Abacus CDOs dropped in value, and AIG had to post billions of dollars in cash collateral to Goldman."
Posted by Palmoni at 9:32 AM

What's the government motive for bringing charges against GS?

i'm confused a little now...did you sell everything?

you mentioned that you didn't think the bull run is over but the correction started...how long will this be...

is there any chance for a double dip...seems like the bears will get their chance to do damage?

correct link -the government motive for bringing charges against GS

here's the deal--This case will raise the level of public anger and help move the financial reform proposals through the Senate---The Current Regulatory Battle, Douglas Elliott, a former investment banker, is a fellow in the Initiative on Business and Public Policy at the Brookings Institution.

The Goldman news came out the same day as this article: All 41 GOP Senators United in Opposition to Financial Reform Bill

As Douglas Elliot says,-
If Democrats play their hand right, though, the suit will make it harder for Republicans to hold all 41 members in a Senate filibuster vote or to break away one or more Democrats. This is not a good time for a politician to be seen as defending Wall Street.

Now, you know why Obama's SEC is going for Goldman.

Once Obama gets his legislation passed, so will the case against Goldman, heck by that time Goldman may even be rewarded.

If you want to read more about Obama's pending government takeover of the financial sector and how it effects you--read here.

I sold a lot of things that had run big, and I also puked up all my index plays.

But Lord help us, if something comes in out of left field. So this thing with Goldman--they supposedly made $15 MM on the deal. What are they going to do--just pay that for a fine?

Does the market think that? They lopped $13 billion off of the stock. They had Cramer with PR on CNBC. They answered after the close. Do not tell me that Goldman wasn't in a panic mode, and in a mode of containment.

The thing is, if this brings the SEC down on Goldman, and already everyone is already saying this isn't a big deal, then, that means, so much of Wall Street's other practices then can be or should be under fire also.

Let's say for an example that Goldmnan didn't update their filings because of the Wells notice that had gone out; (they didn't with Fab, nor did they disclose the Wells in their filings)of which they didn't--of which they got, before they SEC proceeded. You have to update according to FINRA Bylaw Article V, Section 2 (c) 3 (a)and (b) and FINRA rule 2010. Was Goldman's take, then, that this wasn't a part of a legitimate Regulatory effort, but their claim being that this Wells was an abuse of power?

Well, can investors now sue Goldman because the market determined that this was a material event, and Goldman didn't disclose it? Or does Goldman always just have a problem of disclosure.

Their claim would be emboldened by all those, who said that this news was released right after the big banks decided not to play ball on financial or derivative regulation, engaged in all the lobbying and said that this instead, was just a pre-emptive shot to get Wall Street back in line, and therefore to get back in and tow the Administration line. After all, just a few days ago, the bankers thumbed their nose at Obama regarding foreclosures.

Looking at the case, only on Wall Street, would you make that argument. If the director of Goldman was forced out, because they were looking at him to see if he was worked with Raj on insider trading--and really, I talked about that last October people "knew" that--and with all the wires being worn on that case, you would have to surmise that the leak in the WSJ may have come from inside Justice.

Therefore, to me, it didn't seem like this was a non event. Paulson is the largest hedge fund on Wall Street, does that mean that those who invested with him--won't some of them want their money back??

And remember how Paulson had such a hot shot record. How about the new funds that he was putting out? How come it was difficult for him to raise money?

When Mr. Paulson's Paulson & Co. late last year announced it was starting a hedge fund to make a big gold bet, many on Wall Street expected investors to line up. Paulson & Co. scored about $20 billion in profits in 2007 and 2008 wagering against subprime mortgages and financial companies. It then bought financial shares last year to add more gains.

That hasn't happened. Despite months of investor meetings, Mr. Paulson has raised $90 million or so for his new gold fund, according to people close to the matter. Even the $250 million that Mr. Paulson himself placed in the fund hasn't persuaded many investors to get on board
---------

That means that I think people on the street, knew how he had rigged the bets that he had scored on.

Those that made the money with him, will probably want it back.

I don't know the lock up provisions, but I'm sure they are not so dismissive of any of this.

Maybe I take one event, and I look three steps down the road, and then draw conclusions from that. I could have over-thought it.

But if we had a pullback from these levels, it would allow some longs to get in, and it would much healthier for the market in the short run.

I'll let the market tell me what to do. Now remember, the big investors in this market, they don't have that luxury. If they want to sell, it takes time.

I just didn't want this to turn into something a bit more.

But it still is real hard, developing a downside case for this market, and the argument for a double dip, I think--that is fairly remote.

So that was my thinking, but really, you can just boil it down to one thing--sometimes the market makes you get panicky!

The most surprising thing was to market's response to this news. I think it was very deep reactions from market and it falls badly, when news was out.

I used to be very skeptical towards all conspiracy theories, but when you think about it for a minute, I do not believe this whole economic crisis came in unexpected or anything...

Thank you for posting!

This particular one-of-a-kind experience could come together industry front runners and additionally forerunners in EDM inside a insert whereby they might focus on the continuing energy of the sort utilizing immediately ever increasing appeal in addition to racial relevance. Your list of articles comprises of modern technology models, web 2 . 0, certification, and even maintaining neighborhood, individual race not to mention worth for significant development. [url=http://www.nikerunningshoesau.com ]nike free 3.0 v3[/url]
Your four-month development challenge will start for the reason that Bamboozle music and songs event moves on Monday when it comes to Asbury Woodland, the Electric Daisy Fair show up audio fest lasts in MetLife Ground within Se Rutherford together with the New Jersey Demons use the Ny Rangers in any playoff baseball meet for the Prudential Store found in Newark, leading to what precisely New jersey Transit reps are actually getting in touch with all of the busiest end of the week from the status for a statewide carry organisation. [url=http://www.montblancpensukstockists.com]mont blanc pens[/url]
This valuable Uruguayan choreographer, rather long located in San francisco, is a good collapser about room: involving the clients also, the artisans, this intellect and also the bricks-and-mortar. Earthy, oftentimes embarrassed movements, continued repeatedly, turned out to be ritualistic. The feminine physical structure (Microsof company. Achugar quite often mutually wives, having fun with stereotypes whilst simultaneously your lady blows up individuals) surfaces problems both equally erectile as well as sinister. http://www.beatsbydreschweizkaufen.com

Do you mind if I quote a couple of your articles as long as I
provide credit and sources back to your website?

My website is in the very same area of interest as yours and
my visitors would really benefit from some of the information
you present here. Please let me know if this alright with you.
Cheers!

Here is my webpage Mitchel

We are a group of volunteers and starting a new scheme in our community.
Your web site provided us with valuable information to work on.
You've done an impressive job and our entire community will be grateful to you.

It's really a nice and useful piece of information. I am happy that you simply shared this helpful info with us. Please stay us informed like this. Thanks for sharing.

Hey there, You've done an excellent job. I will definitely digg it and personally suggest to my friends. I am confident they will be benefited from this website.

Hey there, You've done an excellent job. I will definitely digg it and personally suggest to my friends. I am confident they will be benefited from this website.

Very nice post. I just stumbled upon your weblog and
wished to say that I've truly enjoyed browsing your blog posts. In any case I'll be subscribing to your rss feed and I
hope you write again soon!

Hi there, just wanted to mention, I liked this article.
It was inspiring. Keep on posting!

I know this if off topic but I'm looking into starting my own weblog and was curious what all is required to get setup? I'm assuming having a blog
like yours would cost a pretty penny? I'm not very internet savvy so I'm not 100% sure. Any recommendations or advice would be greatly appreciated. Kudos

Hello Dear, are you actually visiting this web page regularly, if
so after that you will definitely take fastidious knowledge.

It's truly very difficult in this busy life to listen news on Television, so I simply use the web for that purpose, and take the latest news.