Barron's gets bullish on the steel names 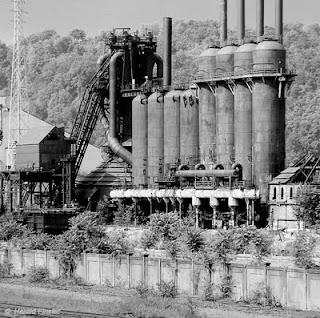 SIGNS ARE ACCUMULATING THAT THE U.S. ECONOMIC recovery not only has legs, but is likely to surprise on the upside. Industrial production is up. Consumer spending is showing unexpected resilience. And employment, a lagging indicator, is notching a decidedly V-shaped recovery, auguring actual job growth in the not-too-distant future. The March numbers showed growth of 162,000 jobs....

The impact was even worse in the steel supply chain. Steep production cuts and lower prices caused both Nucor (NUE) and U.S. Steel (X) to suffer revenue declines of more than 50% in 2009. Reliance's revenues, likewise, fell 47% last year, to $5.3 billion from a pro forma $10.1 billion in 2008.

Anyone see where the stock price on X was then?

The business newspaper said that while U.S. Steel's stock has soared since mid-March, it has recently retreated by about 15 percent off a mid-September high, and could fall even further if the manufacturing sector continues to struggle.

I promised that when Barron's would tip X, I would give readers a reminder!

Now that the stock price has moved up 30 points, Barron's "sees something" in the name!
Posted by Palmoni at 8:27 AM

You are on your game, dude.

Your LVS "tout" was perfect.

any thoughts on APWR ? and what's going on with CCME...all of earnings gains gone.

Hope you had a good Easter!

I just read through the new 10-k filings from that Colombian co. and I see there is no mention of the $20 million PPM. I did see they have a PPM for $5 million so I am wondering if they changed their minds or the details is still being worked out?

The Anori Project looks interesting. From the filings it is stated to be in close proximity to the La Constancia mine which I know is a huge gold mine in Colombia. Initial exploration findings are of 47g/ton. Can you share anymore insight on this project? Thank you! =)

Ano- any insight for CCME..are you holding? seems like we had a 20% pull back from earnings.

I'm still holding my shares. I plan on holding for at least 12 months.

Most of the people holding shares are retail which was obvious if you listened in on the CC so you gotta be patient for the instuitions to come in.