"I want to remain shallow, in deference to Mr. Cramer."

What's the over/under on this before CNBC takes it down?

Apparently Cramer has become very thin skinned. And who is Mr. Sylvain Raynes, with the Phd?

For the past fifteen years, Sylvain Raynes has been involved in various aspects of financial analysis involving a wide array of asset classes and concepts. At Citicorp, he was responsible for the design of a credit-loss analysis model of Citi’s then $30 billion credit card portfolio. At Goldman Sachs, he was involved in the statistical modeling of derivative products and in many other credit-based initiatives. As a senior analyst at Moody's, he continued to focus on the credit aspects of exotic assets (royalties, structured settlements, aircraft leases, non-performing loans, insurance premiums); he helped structure new financial instruments, and was the lead analyst in landmark tax liens and defaulted receivables securitizations. 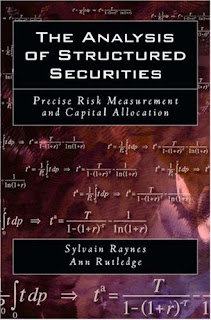 He wrote this book, that had this review on Amazon:

"Much has been written about structured finance and rating, but nothing compares to this truly unique book by Raynes and Rutledge. To my surprise, I could not put it down, as each chapter beckoned of more to come. The authors lay out solutions to the practical problem of rating debt securities in the structured finance context. This book is a "must read" for anyone involved in structured finance. In light of the recent market failure, securities rating is indeed of interest to many investors. In fact, this book offers fascinating reading to anyone interested in the ways we seek to predict the future." --Tamar Frankel, Professor of Law, Boston University Law School

“The system was undermined by asking the American people, under the veil of secrecy, to bail out one company when in fact they wanted to bail out someone else,” said Sylvain R. Raynes, an authority in structured finance and a founder of R & R Consulting, a firm that helps investors gauge debt risks. “The prospectus for the bailout was not delivered to the people. And it was not delivered because if it had been, the deal would not have gone through.”

No wonder CNBC had to shut him off!

He was telling the truth!
Posted by Palmoni at 9:21 PM

mate, is it time to load up on GS?

All we lost today was 1.5%. Not much after all that drama.

GS does this all the time , !Sell Junk, Short The Same Junk, Laugh Your Way To The Bank

More on Sylvain Raynes and his essays on quantnet.com
http://www.quantnet.com/sylvain-raynes-v-jim-cramer