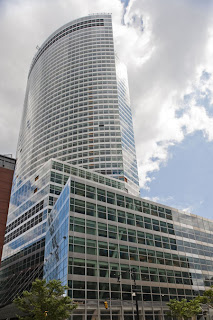 Sometimes the market catches you. And sometimes you sell, and then you ask yourself--what was I thinking?

Here's what Barron's had to say about the Goldman inbroglio Friday:

The SEC filed a civil complaint in Manhattan federal court against Goldman Sachs, charging the firm had defrauded investors.

The 20-page complaint is well worth a read not only for the occasional and inevitable indiscreet e-mail, but because it takes pains to make its case against a sophisticated and complex maneuver in admirably graspable form. We learn, moreover, that Paulson paid Goldman Sachs some $15 million for structuring and marketing ABACUS 2007-AC1. The deal closed April 26, 2007. By Oct. 24, 2007, 83% of the mortgage-backed securities in the ABACUS portfolio had been downgraded and 17% put on negative watch...

Based on the numbers, Goldman shares look reasonable. The stock now trades for under 1.4 times year-end 2009 book value of $117 a share and for just nine times projected 2010 profits of $18 a share. The stock fetches only 1.2 times estimated year-end 2010 book value. And despite all the adverse publicity endured by the firm, it remains a money machine with a strong capital base.

The result: Investors in ABACUS 2007-AC1 lost over $1 billion. But Paulson cleared $1 billion from essentially betting against the very portfolio it helped create.

It's hardly a coincidence, we suspect (and we're not joining the conspiratorial hordes, merely stating the obvious) that the SEC's move on Goldman comes as Congress is wrangling over fiscal reform. And the complaint, whatever its eventual disposition, strikes us as odds-on to yield a tougher bill than seemed in the making as recently as early last Friday.

At the same time, Paulson's involvement isn't likely to enhance the affection for hedge funds among lawmakers or the public at large. As for the market, stocks were looking for an excuse to take a breather or even, heaven forbid, prove they can still go down. Friday's action suggests, it may have found one.

And then they had a rather effusive article praising Goldman, after first airing the dirty laundry:

Goldman's standing probably has never been lower, as the firm already has taken heat for emerging unscathed in the near-collapse of American International Group and for scoring with bets against subprime mortgages while clients suffered losses.

Critics have called the firm "Goldman Sleaze." Warren Buffett, whose Berkshire Hathaway holds a $5 billion preferred-stock investment in Goldman, joked recently that the firm is so unpopular that "they're going to rewrite Genesis and have Goldman offering Adam the apple."

"We're seeing a consequence of a new, tougher style at the SEC, a more adversarial style," says John Coffee, a Columbia Law School professor and securities-law expert. "The SEC has almost always, in dealing with investment banks, entered into consent decrees and it's been a cozy relationship." A consent degree involves a negotiated settlement between the government and a wayward financial company.

The SEC's tough tack may also reflect a desire by the government to counter the perception that it has been too friendly with Goldman.

The losers from the Abacus deal were a German bank, IKB (IKB.Germany), which lost $150 million, and Royal Bank of Scotland (RBS), which lost $840 million.

The Scottish bank's loss, which helped lead to a giant bailout by the U.K. government, itself is fascinating. ACA Capital, designated to select the underlying securities, originally guaranteed the $909 million top-rated tranche of the Abacus deal for just 0.50%, or about $4.5 million.

ACA subsequently got buried by mortgage losses and couldn't pay the claim. ABN Amro, the Dutch bank subsequently bought by Royal Bank of Scotland, provided a backstop to ACA on the deal for an estimated $2 million. That $2 million guarantee ended up costing Royal Bank $841 million when the CDO collapsed, and most of that money was paid to Paulson.

Royal Bank's huge loss raises questions about whether the ABN Amro managers knew what they were getting into and demonstrates the risks in the financial-guarantee business, which Buffett has described as "picking up nickels in front of a steamroller."

In a statement late Friday, Goldman emphasized that it lost $90 million in the transaction, that IKB was a highly sophisticated investor and that ACA had "every incentive" to select appropriate securities because it issued a $900 million guarantee on the deal.

Patient buyers of Goldman stock probably will come out ahead, given the company's low valuation and the likelihood that even a defeat at the hands of the SEC probably will be financially tolerable.

Goldman now has one of the lowest price/earnings ratios of any large company in the Standard & Poor's 500 index -- even lower than those of cigarette makers like Altria (MO) and Reynolds American. (RAI). Goldman's valuation seems too low because, say what you will about the firm, it doesn't make a product that kills.
Posted by Palmoni at 8:52 AM

I don't get it: Is this you (Palmoni) suggesting that Goldman is a buy or is it Barrons?

I'm thnking that Goldman is in a heap of trouble, and could go down for good. If Goldman gets tagged for fraud -- which seems likely given what we know -- all the firms and their shareholders that Goldman damaged will be filing suit to collect compensation and damages. Not only that, but Goldman and its people will be tainted goods. Most Wall Street firms don't survive that kind of thing, do they? I realize it is only wishful thinking but it wouldn't break my heart to see the Goldman b*stards and their families homeless on main street.

No that was Barron's