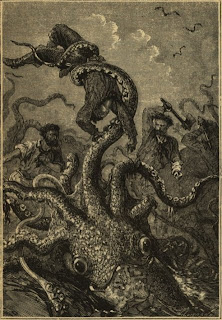 Check out this story:

Friday, as news of the allegations of fraud at Goldman Sachs spread, I got a call from someone who works in the insurance business.

"Check out the former head of ACA" he said referring to the now-defunct and formerly down-graded bond insurer who asked the-not-so-omniscient hedge fund manager John Paulson to choose which securities to put into the CDO, Abacus, that Goldman Sachs subsequently sold to two big clients, the German bank IKB and the Royal Bank of Scotland -- without disclosing that Paulson would be shorting his own hand-picked stocks on the other side of the trade.

My source told me to check out who the head of ACA was married to. "I think you'll find it's a senior woman at Goldman Sachs," he said.

Alan S. Rosenman took over ACA Capital as president and CEO in 2004 - because -- wait for it -- his predecessor Michael Satz had "personal income tax issues" -- (how murky is this story going to get you must be asking?)

According to a Business Week article dated April 3 by David Henry and Matthew Goldstein, Rosenman "immediately began to push ACA into CDO insurance, an area his predecessor, Satz, had only begun to explore."

Rosenman's wife, or at least partner -- they are listed as sharing a house together for which they paid $6.1 million in 2005 in New York -- is Frances "Fran" R. Bermanzohn, who is managing director and deputy general counsel at ... Goldman Sachs.

I called Mr. Rosenman who gave me the illuminating statement: "I am not offering any comment at this time."

I asked him, did he ever disclose their relationship to buyers of Abacus? Did she? And Could ACA really therefore not have known about Paulson's activities?

Jeez this literally makes GS and ACA in bed together !

Great site / I never see aaronandmoses.blogspot.com before in my yahoo Drive up your nice work!

aaronandmoses.blogspot.com Exclusive delirium, in my opinion

It exclusively your opinion aaronandmoses.blogspot.com

I join aaronandmoses.blogspot.com. It was and with me. Let's discuss this question.

aaronandmoses.blogspot.com Exclusive delirium, in my opinion

It exclusively your opinion aaronandmoses.blogspot.com

Best site / I doesn't see aaronandmoses.blogspot.com before in our google Bring up your nice work! พระเครื่อง [url=http://www.pornpra.com/][b]พระเครื่อง[/b][/url]

A good man is hard to find. (Good men are scarce).

Hello to person on this large forum. Include me introduce myself. I am professional and i am competition this website :
fut ile sac ekimi
Waiting for all these friends.
King Regards