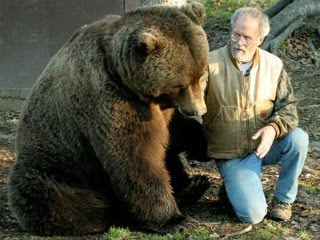 After nearly a year of legal wrangling, Charlie Vandergaw, who for 20 years fed and coexisted with the bears at his Mat-Su cabin, has pleaded guilty to eight counts of intentionally feeding game, according to the state Office of Special Prosecutions and Appeals.

Vandergaw, 71, was charged last May with 20 counts of illegally feeding game at his "Bear Haven" in the Yentna River valley, about 50 miles northwest of Anchorage.
Vandergaw pleaded guilty last week to eight of the charges and prosecutors have dismissed the remaining 12, Assistant Attorney General Andrew Peterson said. A plea agreement, if accepted by the judge, calls for Vandergaw to receive 180 days of suspended jail time, a fine of between $20,000 and $72,000 and three years of probation, Peterson said. 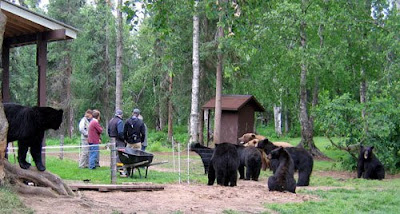 Three years probation? That's the same penalty the bears on Wall Street are serving!
The only difference is, they still don't think they're serving the sentence!
Posted by Palmoni at 8:38 AM

Holy crap. You mean the authorities pursue something as meaningless as this with a stiff penalty?? Some murderers get less. Just think of the resources spent fighting about feeding a few bears. Could stuff like this be part of the reason the U.S.A. is in terminal decline?? (after a market boom first though).