"As I wrote Monday:
In really bad times, people who are evicted from their houses will not rent. Instead, they will move in with friends or family for some time.
As the Wall Street Journal explained last October:


Driving the change [i.e. large numbers of rental vacancies and lower rents] is the troubled employment market, which is closely tied to rentals. With unemployment at 9.8% -- a 26-year high -- more would-be renters are doubling up or moving in with family and friends during periods of job loss. Landlords have been particularly battered because unemployment has been higher among workers under 35 years old, who are more likely to rent. Nationally, effective rents have fallen by 2.7% over the past year, to around $972. 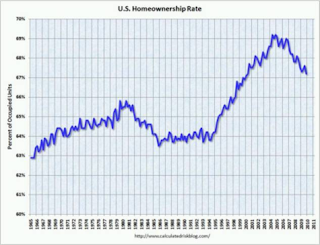 So where have all these people gone who are no longer homeowners? It does not appear that they are moving into apartments or rental housing. As the second graph shows (also from Calculated Risk), the rental vacancy rate is now at 10.7%. While that is down from the record level of 11.1% in the third quarter, it is up from 10.1% a year ago, and the 7-8% range that was normal for most of the 1990s ... 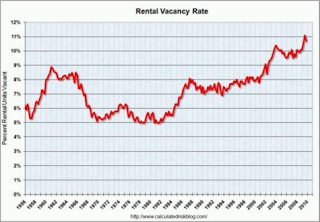 It thus appears that many of the people who used to own their homes, and no longer do, are doubling up with friends and family. This is probably not their first choice of living arrangements, but they are doing so because they have no other choice economically." 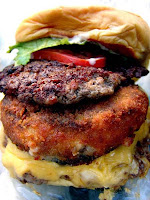 In foreclosure you don't pay your mortgage.

When you stack shack, you don't pay for housing.

And you can spend your money shopping, traveling, gambling, or eating out and having Shack Stacks!
Posted by Palmoni at 4:44 AM