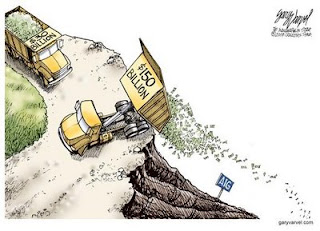 The FT said government-controlled AIG, which made a loss of about $2.0 billion over the deals, was reviewing transactions to insure $6.0 billion-worth of collateralized debt obligations (CDOs) issued by Goldman in the run-up to the financial crisis.

But it added AIG had yet to decide whether to take action.

Our Government, who owns AIG, is going to sue Goldman, who they bailed out, and open themselves up to discovery by the public, when we can't even get emails from AIG and Treasury?

We already know how this is going to turn out. The Fabulous "Fab" takes one for the Goldman team.

Now even though Goldman signed off on the deal, the spin is, it was only a billion dollars, and nobody at Goldman really looked at that deal.

Because only Goldman can have a pitch book that states "Alignment of Economic Interest" while Paulson is picking CDO's that he is going to bet against! 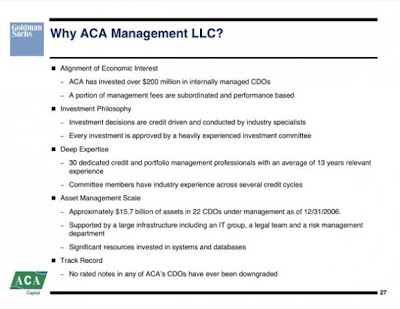 WSJ
The 2007 mortgage deal that set off controversy at Goldman Sachs Group Inc. was quickly approved by a group of roughly a dozen senior executives in a routine meeting in a drab conference room, according to people familiar with the matter...

"The core of the SEC's case is the allegation that one employee misled two professional investors by failing to disclose the role of another market participant in a transaction," said Goldman CEO Lloyd Blankfein said in a recent message to employees.

Some, like the mortgage deal in the SEC complaint—which according to the SEC complaint lost investors $1 billion—were so small that the discussion about them wasn't even memorable, a person familiar with the matter recalls. It was approved the same day it was presented to the group, the SEC complaint suggests.

More significant deals that risked greater amounts of Goldman's own capital were the subject of more detailed discussion, people familiar with the matter say.

Goldman's "I don't recall" defense wrapped up in legalese. It wasn't even memorable!