$180 billion of losses amd no charges 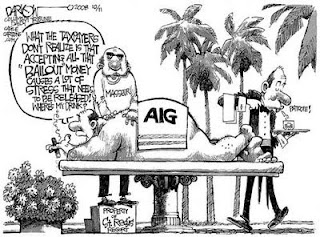 WSJ
Federal prosecutors, after a two-year investigation, may soon decide not to charge American International Group Inc. executives for their role surrounding financial contracts that nearly brought down the company, according to people familiar with the matter.

Recently obtained evidence has prosecutors leaning against pursuing charges, though no final decision has been made by Justice Department prosecutors in Washington, these people said. A Justice Department spokeswoman declined to comment.
----
The "best and the brightest" at AIG were just stupid and $180 billion of losses were just a cost of doing business!
Posted by Palmoni at 8:08 PM