Some more missives of misdirection from the ursine camp 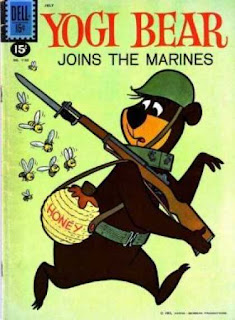 The bears that can't shoot straight are at it again.

Yesterday, we heard about the 50% chance of Armageddon from the MadHedgeFund Trader that has ZERO chance of happening, and now John Hussman is at again, who only last month, told us there was an 80% chance of a second market plunge. In John's November missive he said this:

In my estimation, there is still close to an 80% probability (Bayes' Rule) that a second market plunge and economic downturn will unfold during the coming year.

Now where did he get these bearish balls? From none other, than those whose crystal balls are broken--David Rosenberg.

As Gluskin Sheff chief economist David Rosenberg noted last week, “Even if the recession is over, the historical record shows that downturns induced by asset deflation and credit contraction are different than a garden-variety recession induced by Fed tightening and excessive manufacturing inventories since the former typically induce a secular shift in behavior and attitudes towards debt, asset allocation, savings, discretionary spending and homeownership.

But now Johnnie come lately has set his sights on Fannie and Freddie--and  this time he needs to quote Lenin to get his point across in January's letter: 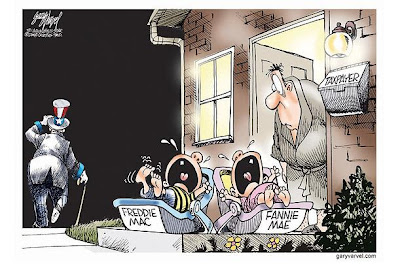 “The best way to destroy the capitalist system is to debauch the currency.”
Vladimir Lenin, leader of the 1917 Russian Revolution

"LIMITATION ON AGGREGATE INSURANCE AUTHORITY.—The aggregate original principal obligation of all mortgages insured under this section may not exceed $300,000,000,000."

But now Treasury has given Fannie and Freddie unlimited financial support for the next three years in their Christmas Eve directive--oh excuse me--the Holiday Eve directive--I'd hate to offend anyone.

Treasury is now amending the PSPAs to allow the cap on Treasury's funding commitment under these agreements to increase as necessary to accommodate any cumulative reduction in net worth over the next three years.

Thusly, he concludes that Lenin reigns, and if you are holding stocks, he recomends that you jump out of the nearest window, providing its not on the ground floor:


What we do know is that stocks are overvalued even on the basis of normalized earnings, to an extent that exceeds nearly every pre-1995 level except 1929. Intermediate term conditions are strenuously overbought, investors (with advisory sentiment now down to 15.6% bearishness) are clearly overbullish, and interest rate trends are pushing higher...But the statistical regularity from overvalued, overbought, overbullish, rising yield environments is one of steep, abrupt market losses generally within a period of about 10-12 weeks.
Another shill seeing tracks on his back. Now he desperately hypes up the folly of his bearish case. And just to prove that Wall Street allows those wrong to pipe their opinions, David "forever bearish" Rosenberg, has a new shill piece, echoing the same. 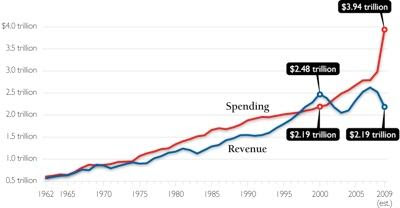 Tax revenues are declining--let's forget about capital gains in the pipeline, the next great deluge for those stuck in their own great delusion because only the Government owns stocks! And he backs that up with this little graph--forget the prices on the board, what did the horse run in training?

And then Rosenberg comes up with this pithy diddy.

"Talk about a behavioural shift in approach. American investors pulled $2.8 billion out of equity funds in November, the third outflow in a row. Year-to-date, stock funds saw net redemptions of $4.1 billion despite a 20% up-year in the market, and this followed a $213.5 billion outflow in 2008. It may be safe to say that the equity cult is dead. When it makes it to the front pages of the tabloids, as it did in August 1979 with the now-famous BusinessWeek cover at that time, then maybe it will be safe to call for the true bottom three years down the road."

Did he ever think what would happen if money shifted into stocks? And why doesn't he count the short base? Who laid out their shorts, and are getting massacred each and every day? Oh that's right. Short covering isn't in these statistics, but why let the rel facts get in the way of a good story?

Even if it's in the pretend land of a couple shills?

Because that is all they are. 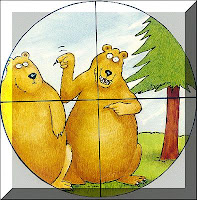 Just shills for the bears, pimping a story that won't come true, all dressed up in graphs and quotes, that will cost you money!!

Back in March of last year, I said it was open season for the bears. Back when people bought into their nonsense.

And that's still the only target worthwhile from these pundits and seers.

The target is on them! 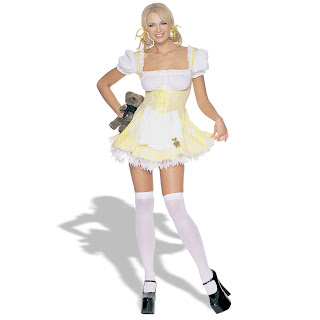 Even if its Goldilocks that has to take them away!
Posted by Palmoni at 8:35 AM

Zero chance? C'mon Palmoni, how about 5%? Let's be reasonable.

One need only look at Denninger's charts to see there will be hell to pay eventually. Is it just that you expect a 2-3 year bull run before that comes into play?

BTW, except for the media types you keep ridiculing, I don't see any bearishness right now. Even the most bearish today acknowledge, however reluctantly, that the market is going up in the near term. Later in the year is crash city of course, but for now it seems to me everyone is bullish.

Except Jim Sinclair, who said this recently:

"As we approach the New Year it seems the party has already begun, and the commentators are all full of spirits. I can’t find a bear in the woods."

"Now go back to February of 2009. You could not find a bull on anything anywhere. I did an interview for a major F-TV station where I specifically said that the bottom of the equity market would occur in March 09. Even the interviewer argued with me."

"Right now it is the absolute opposite even though the economic improvement given as green shoots do not equal the real rate of inflation at the checkout counter."

"In my opinion, the economy as a result of unprecedented stimulation is simply bottom bouncing, an experience seen in 1932."

"I do not buy this spirited party but it is damn lonely out here."

Are you at all concerned with all the bullishness? Too many people are celebrating the 2010 rally that hasn't even happened yet. I say a significant, if short-lived, dip is coming. Or is there zero chance of that as well?

Not concerned with the bullishness because the retail investor isn't even in.

And for those long term charts? Well what does that prove? Nothing. Because the future isn't priced into it. A huge massive bull run, would cure all the ills.

And how is this market, which has had a good run so far, even close to being a black swan event? It isn't. Thusly it needs to go a whole heck of a lot higher for that to happen.

At the end of last year, we had everyone trying to close out their year. Now we start different--where is the supply coming from? Especially when the short base is so huge?

Now I do quote the most intractable bears--so yes, I'm guilty of that--and the Investor polls show that there isn't many bears, so let me give you that point. But if the crowd wants to be bullish, they'll be right.

Only on Wall Street do we have these shills telling us that they are so much smarter than the crowds. How about in football? How many times do we have epic collapses from great teams? Not that often. So why does it mean that we'll have a collapse from here, just because we have some bulls?

And mind you--these bulls today, have hardly made any money.. They are late to the party. But some parties are so good, even the late arriving ones have a great time.

And so what if people are bullish--are we then going to have one of the shortest bull markets in history? is that the bet? With inventories drawn done, with unfulfilled expectations and a consumer that hasn't spent? Do we miraculously turn back all the desires and wishes of the consumer? i don't think so.