Pat Buchanan on the "delusion" 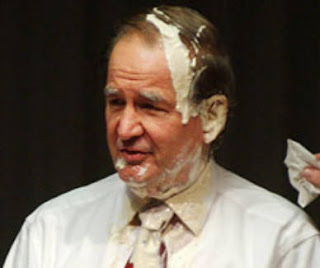 Here is part of the "delusional" talk, that I mentioned in my previous piece, that the bears have grabbed onto and run with. This time, the charge is led by Pat Buchanan's piece A Decade of Self-Delusion.

About the first decade of what was to be the Second American Century, the pessimists have been proven right.

According to the International Monetary Fund, the United States began the century producing 32 percent of the world's gross domestic product. We ended the decade producing 24 percent. No nation in modern history, save for the late Soviet Union, has seen so precipitous a decline in relative power in a single decade.

The United States began the century with a budget surplus. We ended with a deficit of 10 percent of gross domestic product, which will be repeated in 2010. Where the economy was at full employment in 2000, 10 percent of the labor force is out of work today and another 7 percent is underemployed or has given up looking for a job.

Between one-fourth and one-third of all U.S. manufacturing jobs have disappeared in 10 years, the fruits of a free-trade ideology that has proven anything but free for this country. Our future is being outsourced -- to China.

While the median income of American families was stagnant, the national debt doubled.

The dollar lost half its value against the euro. Once the most self-sufficient republic in history, which produced 96 percent of all it consumed, the U.S.A. is almost as dependent on foreign nations today for manufactured goods, and the loans to pay for them, as we were in the early years of the republic.

What the British were to us then, China is today.

Beijing holds the mortgage and grows impatient as we endlessly borrow on equity and refuse to begin paying it down. The possibility exists of an eventual run on the dollar or even a U.S. debt default. 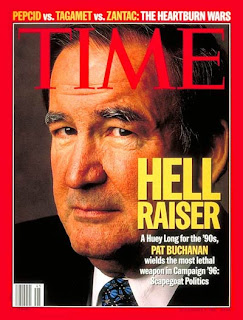 Buchanan's best days are already way in his past.

He still wishes he could get covers like this.

So now he parrots the bears position.

Someone needs to give him a cracker, because Pollyanna is taking his stage!
Posted by Palmoni at 12:20 AM