The latest edicts from Goldman Sachs; after all it's "Bonus Season!" 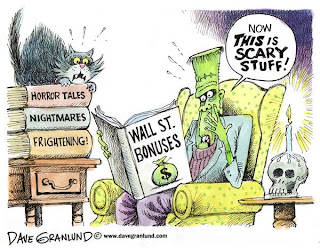 Bonus season is upon us, and it's Halloween for the taxpayer, so Goldman Sachs is trying to keep the minions in line. Especially, since the firm stole billions from the taxpayer at the behest and the help from our Treasury Secretary, Timoth Geithner.

Thusly, Goldman Sachs has adopted a couple of strategies.

The first one is to force charitable giving. From the NY Times:

As it prepares to pay out big bonuses to employees, Goldman Sachs is considering expanding a program that would require executives and top managers to give a certain percentage of their earnings to charity.

The move would be the latest in a series of initiatives by Goldman to soften criticism over the size of its bonuses, which are expected to be among the largest on Wall Street, bringing average pay to about $595,000 for each employee — with far higher amounts for top performers.

The second initiative, seems to have been only discovered by this blog. I hear that Goldman is going to pay the upfront cost and the monthly fees for the new life size Robotic sex doll, for the traders and bankers and lawyers, so Goldman's mistresses won't cause any embarrassment to the firm until at least bonus season is over. 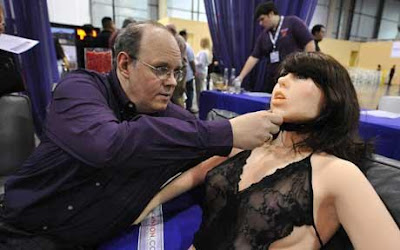 Foxxy Roxxxy is 5'7" weighs 120 pounds and comes with 5 personalities. her race, breast size and hair colour can all be customized. She cost $7,000 and monthly fees are like credit default swaps. They're negotiated between parties!

Wild Wendy, is outgoing, Frigid Farah is reserved and shy, Mature Martha, is the "Abbey Cohen" version, and S&M Susan is for those who like whips.

We know that Goldman has been desirous of the GFE, so Lloyd is doing his best to help the folks at Goldman out!

After all, when you screw everybody on the Street, you want to pretend that it is at least friendly!

Or at least until bonus season is over!
Posted by Palmoni at 12:18 PM

Sex Robots??? I sooooooooo saw that one coming!

News out of Colombia!!

Okay Palmoni,
Spill the beans on the properties that were merged into the shell :D

Hopefully tens of millions of ounces of "expected" gold reserves. They'll be proving them out.

10% of one small project yielded 400,000 ounces of gold with their previous data. So these drills will go down 120-130 feet to prove out the reserves (not just 10% but all of this project) and with the drill bit technology, they'll be able to do almost two holes a day versus older technology that does 1-2 holes a week. They want at least 200 holes. Their 43101 (which proves out gold reserves)will then have a 5 1/2 inch sample, with 200 holes, down over 90 feet.

So 4 million ounces in the ground at 10% of spot equals $450 million market cap.

And that's just one project.

In regard to the alluvial mining, Mineros has the largest alluvial gold project right next to them.

That 1500 acres they have been dredging--heck 20 years bringing up gold.

Holes will start in March, probably proved out by May--by then they'll have a sufficient sample size to get plenty of $ by selling out the proved reserves.

Now remember they have areas that probably have 50-60% of the gold left in areas that previous technology was used years and years ago. The estimates of the gold there is staggering--but get the proved out reserves, and I'll show why later why these projects have way more gold than what people realize, but that's the quick version of the press release today.

...the only thing is it takes time to get all this stuff done... I probably operate on a faster schedule than most companies...I saw what they had and figured Wall Street would soon throw money at them. . they were but Wall Street wanted to rape the company first. They had the data so they knew what they had, and they took a longer time to get everything in order.

Thanks for the update...i tried to sell a few shares of the colombia co this morning but no one bought at the $8.71...was trying to sell to get back in lower...

but i guess i shoudl just hold...thanks for the news.

Thanks for the update Palmoni!

You said Wall St. wanted to rape the company first, what you mean by that? Was that the reason for all the delays?

Now that the merger risk is gone, I am assuming people will slowly get on board as they are just exposed to the "what's in the ground" risk.

I have already started working on my forecasted cash flows in an excel spreadsheet. Is assuming a 20year mining project about right for this? Care to throw out the typical mining costs for gold and platinum? I have them at $475/oz and $525/oz respectfully. Also you want to speculate on the share O/S once they raised the money? I'm thinking 25million - 50million. This is already turning out to be a good year. Thanks again! :P

There costs should be less, by at least $100 ounce, and even less for alluvial mining.

I don't think the share count will increase much. They'll sell forward some of the gold in the ground to finance operations versus a stock sale. Maybe a couple million shares sold at higher prices, but they don't want to sell stock at these levels.