James Simons flips investors the bird--again and again and..... 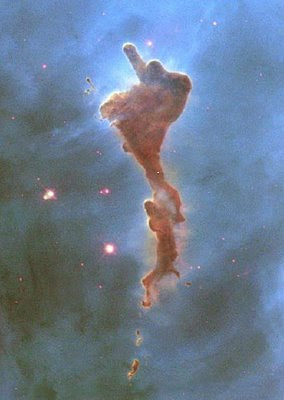 You would of thought that investors learned last year!

Last year, I highlighted these returns where it seems Simons inexplicable screws his investors with all their hired astrophysicists whose returns are always materially less than Medallion's, and always in the opposite direction!

How did his funds do? Here are their returns for 2008. James Simons futures fund-DOWN 12%
James Simons Renaissance Institutional Equities Fund- DOWN 16%

Let's check out this year--2009. Would Slippery Simons screw investors once again? With the WSJ, finally on his trail, back on May 15th?

In a conference call Wednesday, investors asked Mr. Simons about why the Renaissance Institutional Equities Fund lost 17% this year through April, lagging behind the stock market, while another fund -- held nearly exclusively by Mr. Simons and his colleagues -- surged 12%. The fund, known as RIEF, also lost money in 2008 while the internal fund jumped 80%.

Here are the returns of the largest hedge funds. Slippery Simons returned 38% to himself and his buddies at Medallion for 2009. 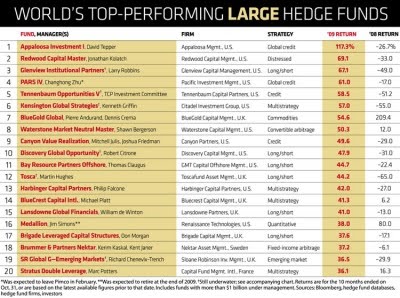 How did long suffering shareholders of REIF do? Who got screwed royally last year, while Simons profited? 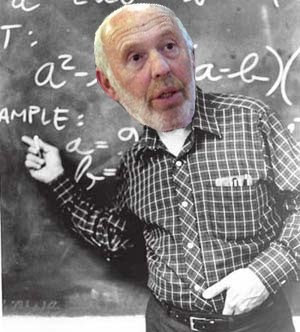 They underperformed the S&P by almost 30%!

Which is why in October, his clients got this letter:


As many of you know, for the past several years I have gradually stepped back from day-to-day operations of Renaissance. Six years ago, Bob Mercer and Peter Brown became co-executive vice presidents, with all research and production reporting to them, and two years ago, they became co-presidents, assuming a broader set of responsibilities. The time has now come for me to take one further step back.


As of Jan. 1, 2010, Bob and Peter will become co-C.E.O.’s of Renaissance, with all areas of the firm reporting to them. I will remain the company’s principal shareholder and chair of the board. As such I will regularly attend monthly meetings of the executive committee and meetings of the board whenever scheduled, participating in all major corporate decisions. Consistent with best practices, Paul Broder, our chief risk officer, and Mark Silber, our chief financial officer, will report to the board on a dotted-line basis.


I am confident that this transition is best for the firm. I have led the organization and its predecessor for 31 years, and it is definitely time to pass the torch. We are very fortunate to have such able people as Bob and Peter to take the reins. Behind them and Paul and Mark is an outstanding cadre of senior management in all areas of the company, and behind them is a wonderful group of knowledgeable and hard-working individuals. Renaissance is a marvelous firm, dedicated to its investors and its employees. I have every expectation that under the new leadership this tradition will brilliantly carry on.

How about in his wallet!!

He's brilliantly carrying on!
Posted by Palmoni at 11:55 AM