Obama's man, now says GM will be profitable! And once again the bears have another story that they were out to lunch on!

WSJ:
General Motors Co. will make money in 2010, its chairman said Wednesday, a bold and surprising forecast for a business that exited bankruptcy proceedings just last summer and hasn't turned an annual profit since 2004.

"My prediction is we will be" profitable in 2010, Edward E. Whitacre Jr. told reporters at GM's Detroit headquarters, a sign of rising confidence that also sets a tough benchmark for the still-struggling car maker's employees. "Do we have obstacles in the way? Yes. But we have a good management team and a good plan in place."

...Other auto makers are also optimistic. Ford Motor Co. reported almost $1 billion in net income in the third quarter and now expects to be "solidly profitable" by 2011, although it hasn't given a specific forecast for 2010. Toyota Motor Corp. and Honda Motor Co. recently brightened their financial forecasts for their current fiscal years.

Remember how "Cash for Clunkers" was supposedly just demand pull? What happened to those auto supplier and car bears?

They've got tire tracks on their backs! 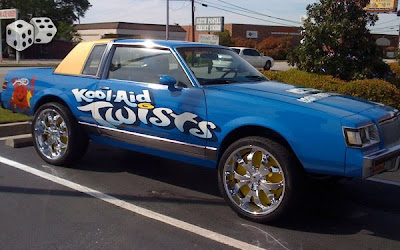 The bears were drinking their own Kool-Aid!
Posted by Palmoni at 7:58 AM