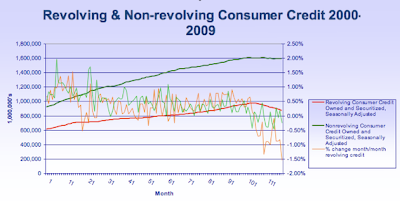 Meredith Whitney, touts that line, but when 15% of homes are behind in payments or in foreclosure, do you think those people are out getting new credit cards?

Debit transactions make up almost 59% of all plastic activity anyway. So the Atlantic has a different spin on the deleveraging myth:

Pundits and analysts have recently celebrated yet another reduction in U.S. consumer debt as a sign that we're in full-on recovery mode and the worst is behind us. Last week the Federal Reserve released data on consumer credit through November 2009. I checked out the data myself and found that all that consumer deleveraging we're hearing about is a big fat myth.

Contrary to the claims of several notable pundits, there was no "Great Consumer Deleveraging" in 2009, nor was there one in 2008. After peaking in mid-2008, mortgage debt decreased only 1.8% through the third quarter of this year. With unemployment sticking around 10 percent and benefits ending for many recipients, I see delinquencies and defaults continuing to rise throughout the year, which I believe is corroborated by historical FDIC data. 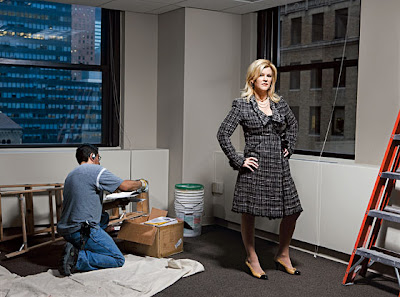 Meredith Whitney, who promised the world would collapse because the consumer's credit lines would be cut, said on March 22, 2009 in an interview, when she should of figured this whole thing out, said this in that interview:

Oh. Now we see the secret to her non-success since the 666 bottom!

She's primping in the mirror, instead of pimping what's happening!
Posted by Palmoni at 8:06 AM