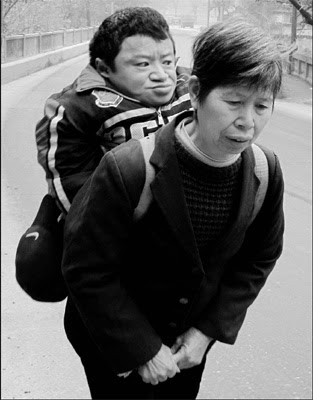 Unlike most people who connect the image of a loving mother with a smiling face, Xiong Mingqiang visualizes the pair of thin shoulders that have carried him for 35 years.

Born with a deformity, Xiong's head is disproportionately large for his small 80-cm tall body, which prevents him from even standing up on his own.

The unfortunate man fortunately has a mother who chose to forever shoulder him in a bamboo basket, caring for him and keeping him in touch with the world outside of their timeworn earthen house.

Xiong was brought up in three damp, dingy rooms in the Taluo mountain village, Nanpeng county, southwest of Chongqing municipality.

"But we were later told that he is deformed, which sentenced Xiong to being unable to stand up for life. Many neighbors have suggested I abandon him for his own sake as well, but how could I ever do that?" said Wen.

She said since then, she knew the child needed to be helped for the rest of his life.

"I think every mother would do the same thing."

A neighbor of theirs said Wen used to carry Xiong for 6 km after work to watch television in her home every day for more years than she could count.

"My mom is my legs and hands. Having her around, I feel less handicapped," said Xiong.

With the face of an adult, Xiong continues to travel in his mother's basket, regardless of others' looks "mostly tainted with curiosity or scorns".

Crawling and sometimes hiding behind his mother's back, Xiong said he is more familiar with the aging woman's shoulders than her face.

"I've seen close up her hair turning gray and back bending even lower. I've become very uneasy that one day she might pass away and leave me alone," he said.

"But at that time, I will feel more sad for not having done anything to pay her back - all I can do is to sit and move my lips."

"For now, I would rather stay in than ask to be moved outside - to lessen her burden," Xiong said, patting his mother's shoulders in a way to "massage" her.

But his mother thinks differently.

"As long as I have one last breath, I'll keep carrying him and letting him enjoy every day," Wen said.
Posted by Palmoni at 11:24 AM