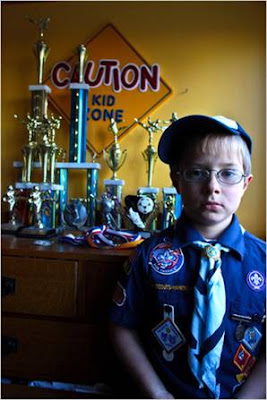 Michael Winston Hicks’s mother initially sensed trouble when he was a baby and she could not get a seat for him on their flight to Florida at an airport kiosk; airline officials explained that his name "was on the list," she recalled.

The first time he was patted down, at Newark Liberty International Airport, Mikey was 2. He cried.

After years of long delays and waits for supervisors at every airport ticket counter, this year’s vacation to the Bahamas badly shook up the family. Mikey was frisked on the way there, then more aggressively on the way home.

"Up your arms, down your arms, up your crotch — someone is patting your 8-year-old down like he’s a criminal," Mrs. Hicks recounted. "A terrorist can blow his underwear up and they don’t catch him. But my 8-year-old can’t walk through security without being frisked.

Newsflash for the TSA--8 year old cub scouts aren't a threat!
Posted by Palmoni at 8:41 AM

Yes, they are a threat.

Apparently you have never noticed that the arabs have no reservation using children to carry out suicide bombings. So why not bomb up a 8 yr old knowing he will get a free pass onboard??

Of course it all stems back to the stupidity of religion. The terrorists are sure that allah will reward the child with a wonderful afterlife, kinda like what you christians are in for after death.
Christians these days just lack the true faith the terrorist have otherwise you too would be sending children bombs into the enemies
zone.

that being said, most christians only believe as long as its comfortable and doesn't get in their way of life