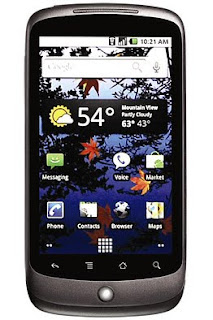 A lot of hype, so here's what Mossberg at the WSJ has to say:

The Nexus One finally has the right combination of hardware and software to give Android a champion that might attract more people away from their iconic iPhones and BlackBerrys. It has a larger screen than Apple's phone, and is a bit thinner, narrower and lighter—if a tad longer. And it boasts a better camera and longer talk time between battery charges.

Also, because it will be available on the large, well-regarded Verizon 3G network, the Nexus One could tempt American iPhone users, tired of problems with AT&T, to switch.

The iPhone still retains some strong advantages. It boasts well over 100,000 third-party apps—around 125,000 by some unofficial estimates—versus around 18,000 for the Android platform. And it has vastly more memory for storing apps, so you can keep many more of them on your phone at any one time. On the Nexus One, only 190 megabytes of its total 4.5 gigabytes of memory is allowed for storing apps. On the $199 iPhone, nearly all of the 16 gigabytes of memory can be used for apps.

For instance, Google claims just 6.5 hours of Wi-Fi Web use per charge, versus nine for the iPhone, and 20 for music playback versus 30. Google claims this is because, unlike Apple, it allows the simultaneous use of third-party apps, which can drain the battery faster.

In addition, the Nexus One, and other Android devices, still pale beside the iPhone for playing music, video and games. The apps available for these functions aren't nearly as sophisticated as on the Apple devices.

Finally, the iPhone is still a better apps platform. Not only are there more apps, but, in my experience, iPhone apps are generally more polished and come in more varieties.

But, with its fresh phone and bold business model, Google is taking Android to a new level, and that should ramp up the competition in the super-smartphone space.
Posted by Palmoni at 4:14 PM

Great blog. Very entertaining and informative. A couple of things:

1. I notice your blogger profile says that you like the Torah. Are you an orthodox Jew? Do you study gemara?

2. In reading your blog, it's obvious to me that you see all the problems and that you "get it" in terms of the fiasco that we have on your hands. So how do you reconcile this with such a bullish bias, other than you're (correct and very wll I may add) playing the side that the government is just going to keep propping things up. What is your view on how long this nonsense can go on? Or do you really believe that this is sustainable (which is inconceivable to me considering the outstanding debt that is stuffing the system? Thanks.

Great friends with an absolutely brilliant Orthodox Jew, who also happens to love the market but not as much as he loves the Torah! Compared to the nuances of Gemara the market is a piece of cake!

So you set me up--how do I reconcile the differences with my bullish bias, with the fiasco we have on our hands--to complete that picture!

I'd humbly and hopefully defer to Bamidbar Rabbah 20,11 "whichever path a person desires to tred, he is led" and hope that I get help with the nuances...

and then say we have at least another six months, when then we'll be high enough to correct

You say we have 6 months before we correct. But what do you mean by "correct"? Are you talking a few hundred on the S&P, or are you talking about the mack daddy wave that blows everyone up? How low do you think this goes when the wheels start to fall off?

I was hoping for a fully formed and designed phone by google - not a near last minute adoption of the HTC. Still looking to replace the iphone... But would rather just switch to verizon...

No mack daddy blow up! But maybe 15% after we get up high enough!