Bush gets blamed by Obama supporters for Coakley 's swandive 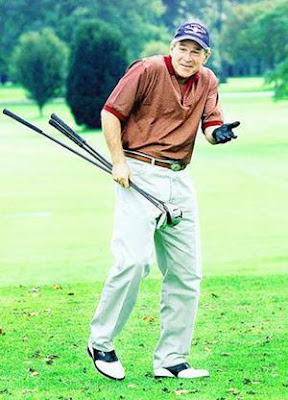 "People are upset because there's so many problems," Rosemary Kverek, 70, a retired Charleston schoolteacher said as tonight's rally wrapped up. "But the problems came from the previous administration. So we're blaming poor Obama, who's working 36 hours a day ... to solve these problems that he inherited."

Rep. Patrick Kennedy (D-RI), speaking with a gaggle of reporters after the event, said that while state Sen. Scott Brown (R) offers voters a quick fix, in reality, the problems created by "George Bush and his cronies" are not so easily solved.

"If you think there's magic out there and things can be turned around overnight, then you would vote for someone who could promise you that, like Scott Brown," Kennedy said. "If you don't, if you know that it takes eight years for George Bush and his cronies to put our country into this hole ... then you know we have a lot of digging to do, but some work needs to be done and this president's in the process of doing it and we need to get Marcia Coakley to help him to do that." 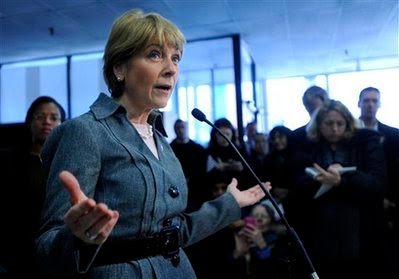 (Curiously, Kennedy mentioned Coakley repeatedly during his remarks to reporters, each time referring to her as "Marcia," not "Martha.")

Even the editorials are filled with people that are tired of the Bush blame game:

Obama gets blame
Obama's been president for a year, and has done nothing

When are those of you who continue blaming Bush going to get the message that Obama is the president and has been for a year? This most inexperienced president does more talking than actually accomplishing anything, and you blame Bush? When does it end? Every president inherits something. Obama broke his word on transparency, C-SPAN, lobbyists, and I could go on. And you still want to blame Bush!

Martha forgot one expression..."You wouldn't jump into my grave so fast!"

And she started her shadow campaign for Kennedy's seat, in January of 2009, even garnering complaints that she violated Federal Election Laws with the spending of her money.

She was predicting Teddy's death more than Rush, and now they'll blame Bush when she loses!

And one more supporter of Coakley, Ed Schultz of MSNBC:

I tell you what, if I lived in Massachusetts I'd try to vote 10 times. I don't know if they'd let me or not, but I'd try to. Yeah, that's right. I'd cheat to keep these bastards out. I would. 'Cause that's exactly what they are.
Posted by Palmoni at 9:06 AM