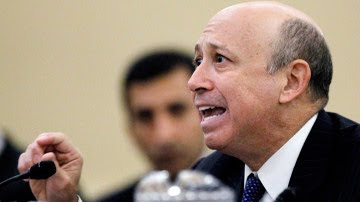 Today, when Lloyd Blankfein, was cross-examined by  Philip Angelides, the chairman of the Financial Crisis Inquiry Commission, Lloyd tried to pawn off the story that they were just market makers--unloading their dreck to sophisticated institutions that wanted what Goldman was peddling.

Even though Goldman was shorting what they sold!

To buttress his case, Lloyd said that insurance rates for hurricanes went up markedly after 2007, even though they shouldn't of been that high. Who could of forseen that?

Angelides replied that he was familiar with "Acts of God" and to compare Goldman's deliberate abuse of asymmetrical information in the packaging of dreck that they sold to institutions, whose buyers were the fiduciaries of the pensions of Mom and Pop, just didn't wash.

Score 1 for Mr. Angelides, who managed to wipe the smirk off of Lloyd's face!

Now a couple days ago, I broke the story how Goldman was paying for Foxxy Roxxy, the robotic sex doll for its traders and its bankers--or at least until bonus season is past.

Now we have further evidence why that was necessary!

Because the sheep now ain't safe!

In Izmir, Turkey, 145 days after the Goldman Bankers left the city, a sheep gave birth to a dead lamb, that the veterinarian, Erhan Elibol removed via a C-section. 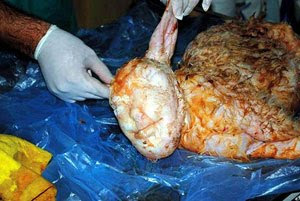 And the sheep had the face of a man!


The vet said this. “I’ve seen mutations with cows and sheep before. I’ve seen a one-eyed calf, a two-headed calf, a five-legged calf. But when I saw this youngster I could not believe my eyes. His mother could not deliver him so I had to help the animal” The lamb’s head had human features on – the eyes, the nose and the mouth – only the ears were those of a sheep.

But if you look real closely at the face, it has a strange resemblance to Mr. Blankfein's!

Maybe Goldman will remember, while they talk about doing God's work, that a Lamb died to pay for their sins!

And that Goldman should get off the cross with their "principal" excuse!
Posted by Palmoni at 4:05 PM

Lloyd had the best facial expression whenever the Congressman spoke!