Angel, a golden retriever saves a young boy from a cougar attack 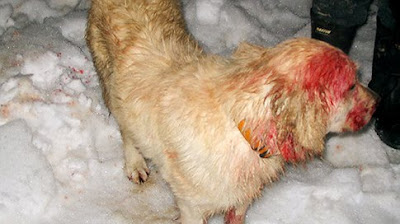 Angel by name, angel by nature.

A Canadian family's dog saved her 11-year-old owner's life Saturday by stepping between him and a cougar.

Angel, an 18-month golden retriever, sustained puncture wounds around her head and neck from the deadly scuffle, CTV News reports.

The cougar charged Austin Forman as he was collecting firewood from the yard of his family's home in Boston Bar, British Columbia -- near Vancouver.

Angel was at Forman's side at the time and proceeded to move between him and the wild cat.

"A cougar is eating Angel!" Forman screamed as he ran into his home.

The boy's mother, Sherri Forman, reportedly had to ask her shocked son to repeat himself numerous times.

Sherri could not see anything when she looked out the window, but she did hear Angel whimpering.

"To feel so helpless, I knew I couldn't do anything," she told ctvbc.ca in a phone interview.

On her father-in-law's suggestion, Forman called 911. An RCMP constable happened to be nearby and was reportedly on the scene within a minute.

According to police, the officer fired two rounds into the cougar, which was under the porch chewing on Angel's neck. Despite being shot in the rear, the cat continued to attack the retriever.

The officer moved within five feet of the cougar to shoot and kill it. Even in its death, the cougar's jaws remained closed on Angel's face, said Sherri Forman.

After the ordeal, Angel was silent, but then took in a gasp of air and got up.

A local animal caregiver is helping her recuperate from her wounds and a swollen eye.

In a seemingly prophetic move, Angel had been following Austin around prior to the attack.

"She must've known something was up," the boy's mother said. "Now, she's our guardian angel."
Posted by Palmoni at 10:21 AM

Sound like classic liberal anti gun folk. Nothing to defend themselves and their dog with.

Except they found out a gun can be a good thing for defense, be it a human or an animal.

They were just lucky the cougar went after the dog rather than the kid. Then the lesson would have been very expensive. Especially if the cop response time was more within the normal time of 25 minutes.

They call gun advocates like myself gun nut wackos.
And we consider them anti gun idiots.

Omg that is an amazing story. I'm so glad that boy was saved.

How in the Hell does anti-gun come into play in this story, please enlighten me??? So if the mother had a Gun at her side she would have taken it upon herself to use it on the Cougar rather than wait for police?

Are you suggesting she should be a helpless creature who can't act in her or her families defense??

If these people had weapons, she would have knowledge and experience in using it and could have responded herself.

The story smacks of politically correct sheep who need a babysitter cop to save them from harm.

Hey Dr. You better hope the next time your in a life threatening situation that police will suddenly appear out of the ether to save you simply by dialing 911.
Stats show in most cases police arrive well after the fact.

As thre NRA says, when seconds count, the cops will be there in minutes or hours.