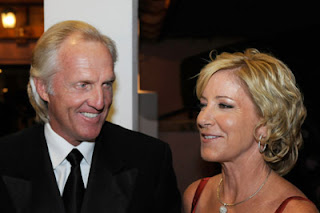 Greg Norman and Chris Evert are now splitting after 15 months. 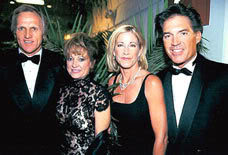 So Norman could divorce his first wife, Laura Andrassay, so he could marry the wife of his former best friend, Andy Mill?

That was a trade made in divorce hell!

And now they are both stuck in it!
Posted by Palmoni at 9:04 AM

Ah, the grass is always greener on the other side. Take someone elses old lady in trade for your old lady. And expect different results. Isn't that the tell tale sign for insanity?? Aside from the divorce money, It amazes me how much we pay a guy for hitting a golf ball a little better than you or I do. I mean really, so what? These sports have gotten totally nuts in monetary reward. I know one thing, he didn't get a dime from me buying his wildly overpriced King Cobra clubs. If I remember the numbers he got something like 120.00 personally for every driver sold. I bought a knockoff set of Pings for a couple hundred years ago and they work excellent.