Barron's touts Novatel with their new Mi-Fi. I think it is a good tout. Here's consensus estimates--but some analysts think Mi-Fi could be a big hit: 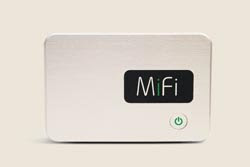 WHEN YOU TRAVEL WITH YOUR very own Wi-Fi hot spot, you can draw a crowd quickly. I learned that when I fired up my laptop and Novatel's new Mi-Fi during a 60-minute train trip from Princeton, N.J., to New York. Soon, three or four businessmen gathered around to watch as I surfed the 'Net via a Wi-Fi connection, something usually not available on the train. By the standards of New Jersey commuterdom, at least, the Mi-Fi was a minor miracle.

The pocket-sized device, from a company called Novatel Wireless, connects to the Internet via high-speed cellular networks and then converts those signals into Wi-Fi, for the benefit of any enabled devices within a roughly 30-foot bubble.

When I tested a Verizon unit from my car while parked in a field with no normal hot spots available, my laptop downloaded a slew of documents rapidly. It was practically as fast as my cable modem back home. I then drove around the neighborhood, with my wife at my side searching the Web. Mi-Fi pulled in data for almost all of the five-mile ride, stopping only once when it briefly lost the cell signal.

In addition to working well and looking sleek, the Mi-Fi is one of those rare gadgets that couldn't be easier to set up and use. Push the On button, let your phone or laptop find the Wi-Fi network, enter the pre-stored password printed on the back of the device -- and you are browsing.
-----
NVTL closed at 11.09. The Jan 10 calls are $1.85-2.00 and the Jan 12.5 calls are .85.

The stock and the calls should prove a good spec.
Posted by Palmoni at 8:41 AM

Too bad... there was no time to get in this one.