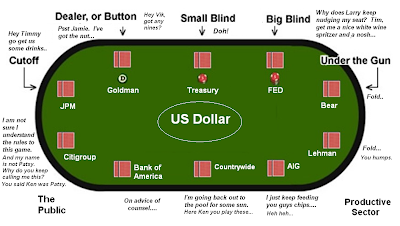 do you recommend just holding and waiting everything out while trying to be patient?

most of my MGM gains have evaporated...and all the positions i entered last week have been hammered big time.

It's like liquidity is being sucked out the markets!

Most people hedged things--but when their hedges don't protect their gains, they increased their hedging which excaberates the selling.

And that sucks the liquidity out.

And the shorts are pressing. And selling longs that aren't working and reloading with shorts.

That's what it seems. Goldman changed Q3 GDP to 2.7% from 3%. I think the giant prop desks are trading this market from the short side.

At this point though I'd hold MGM.

But I'd own some puts for protection in some of the names that are starting to break down--look at COF--that pig is bloated and starting to roll over.

I just don't buy the financials earnings. Most of them were a work of fiction and lies. And they know it. I'm short some of them. And I sold V and MA today on the morning pop.

Look at FLS--that looks like it is rolling over. I have puts in that number.

do you think we'll be short for the rest of the year or we still have a shot to hit your 1120 year end target?

a bit confusing...TK over at slopeofhope said the party is over with his tech analysis and charting.

as always thanks for your insight...i don't have an option capability.

also...if your shorting financials would you recommend dumping C?

I think it is just a temporary thing here....and this is really what the market needs to launch us higher.

I still think we are going to get a rally into year end. We had Roubini on CNBC Monday, Rosenberg on Tuesday, and Bill Gross today. They only seem to stick their head out when the market comes in.

My bearishness today is just temporary. A lot of damage has already been done to stocks--but it just what is working right now.

This pullback helps the big picture. Remember every pullback has been contained within 5.6%. That would put us back to 1040 on the S&P.

We just need to shake out all these Johnny come lately bulls, and let the perennial bears make an appearance before the bulls start snorting again.

But we got to give the bears just little room this time because we are soo much higher.

thanks...seems like the bears are planning to load up the truck with shorts very soon .

Yeh that's why it's always easier picking the averages!

I got crushed on some stuff I bought last week

Wow the markets humbled me the past few days but I guess it's time to reload!!

I got crushed on some stuff I bought last week
----------------------
really Palmoni? how come you are not always right? Thats not possible! I do not believe it! You are always right and its the rossies and goldmans and deningers and everybody else that are always wrong. You so disapppointed me today.

I know it's getting close for the market to turn--the bears are coming back!!

The market looks terrible..banks are rolling over--and they should..their earnings were fiction.

They sold tech on good earnings..and everyone will sell first and ask questions later.

Goldman wants the market down and they are the biggest player and provider of liquidity. So you know they are short huge. They see the books of everyone else. So they know they have the finger on the sell bottom.

All I know is my shorts are making more money than my longs are losing. And there is more than a whiff of panic in te air.

And in a panic, he who panics first wins.

And in a tie, panic wins!

We'll see what the GDP figures come out with tomorrow. The PPT will probably be doing their best to prop things up tonight--but there is no sin in selling until things get clear.

The problem that I see is that the bank's earnings are bullsh*t. They aren't real.

And this time, these stocks can be attacked again, and now these banks won't have the Govt to backstop them.

If we melt, who is going to provide the other side?

Hell-if they melt, the bonus pool will be needed for capital.

And that would almost be the way that the money could be taken from these bankers!

So I can understand the bearish mindset. Panics cause panic!

Why else was Goldman pushing for nonregulation? You know what side they are on.

They say you should never bet on panic. So you have panic or Bob Doll, or Bob Pisani, or Maria Bartiroma to cheerlead.

I'm not sure about a market panic, but its not a bad bet to bet on a panic in the financials.

Because that's where panics start.

so i guess buy some FAZ?

I like options plays on individual names. I know that FAZ is what the pros play, but there was always too much churn in that.

I'd rather play the short side of the FAS instead --if I had to make a choice.

The churn should protect you if you are wrong.