Busting out the Joint 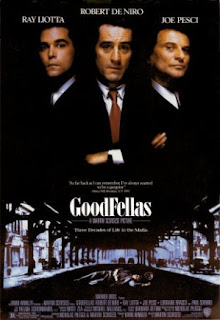 Around 1990, I saw “Goodfellas” when it first came out. Scorcese’s quasi-nostalgic take on the Italo-American gangster culture of the 1960’s and ’70’s was like a tricked out Cadillac convertible: Eye-catching and glittery, and very very memorable.

One of the scenes that struck me—and a film-school textbook example of how to stage a tracking shot—was the scene where the mobsters “bust out” a neighborhood restaurant. The camera dollied sideways as it first showed a long line of delivery men bringing in an obviously excessive amount of goods and supplies to the restaurant, then it showed how mobsters were taking those supplies out of the restaurant through the front door and loading them onto the back of a truck, all in one smooth motion.

This was called “busting out the joint”.

Beu-di-ful!, as the mobsters would call this racket. Not so “beudiful” for the business owners or the creditors—which is why of course there are laws against this sort of thing: Racketeering laws. Laws against fraud. This kind of planned bankruptcy is explicitly illegal, as per 18 U.S.C. §152, as well as 18 U.S.C. §157, both of which cover bankruptcy fraud, which is the use of bankruptcy in order to aid in or conceal the commission of a fraud or theft.

I would argue that that is exactly what has happened to the U.S. economy, at virtually all levels.

Let’s look at a couple of cases.

Now these CDS insurance contracts were suicidally dangerous—Warren Buffett years before had called them “weapons of mass financial destruction”—and Buffett has never been one to make hyperbolic statements just to stir the pot. Writing CDS insurance contracts delivered big profits to the fool stupid enough to write them precisely because they were so dangerous. Anyone asking the obvious question—“But what happens when there’s a downturn?”—would instantly realize how dangerous they were. But AIG kept writing and writing them, cheerfully taking on massive exposure while careful never to allow CDS insurance contracts to be categorized as insurance contracts per se, so as to avoid regulation.

Well, we all know that movie ended, if not in its details then in a good-enough outline: The market tanked, the CDS insurance contracts came due, and the Federal Government/Federal Reserve stepped in and propped up AIG, making everyone in the financial services sector “whole”, while leaving the taxpayers, well, “in the hole”. In return for this bailout, of course, AIG promised to work off the debt and “pay back the American people”. AIG expects to repay the bailout a couple of days before the Apocalypse. Or at least they hope it’s some time before Armageddon: They’re not making any promises or anything, just crossing their fingers and really really hoping.

However, Maurice Greenberg, who ran AIG before it crashed, and who pushed for the aggressive expansion of the CDS business which ultimately led to AIG’s (not-demise) zombie-fication, suffered no pain from AIG’s collapse.

Why did he feel no pain? Because he had already left the business—with quite a tidy sum.

His actions beg the question: As the head of AIG, wouldn’t Mr. Greenberg be in a position to know exactly how risky the business was, and whether or not it was healthy or not?

Answer: Of course he would—just like a mobster knows when the neighborhood restaurant he’s busting out knows when it’s time to go.

Mr. Greenberg left mere months before the AIG meltdown/collapse. He missed out on all the fun!

And now that the party’s over and AIG effectively is an endentured slave to the government, tiredly paying off its bailout, Mr. Greenberg is recruiting away the best people from the company in order to set up a new shop.

Insurance companies, by definition, are businesses of almost pure added value: All that’s necessary are people, capital, and phones. If an insurance company has no people—or at least none of the people who know the business—then the business is nothing but an empty husk with a balance sheet. And if that balance sheet is for all intents and purposes insolvent, well then…

By setting up a new shop, Mr. Greenberg is basically cloning AIG, while leaving behind the empty bankrupt shell of AIG to the hands of the suckers who bailed it out—namely, the government, and ultimately, the people. In other words, Mr. Greenberg will wind up with a new AIG sans the insolvency, sans the government oversight (minimal though it is), sans the “bad reputation” of AIG, and on top of that, he will keep all the money he made off the CDS that AIG underwrote.

It could even happen that, if and when this new Cloned-AIG goes broke again on credit default swaps or some other clever bit of financial engineering, Mr. Greenberg will again leave it to its fate just before it bankrupts. After all, life is a wheel, endlessly repeating . . .

In 2003, Simmons was purchased by Thomas H. Lee Partners, a private equity firm. Over the next six years, TLP paid itself lavishly from Simmons bank accounts for the privilege of taking it over, while at the same time loading Simmons with debt. In point of fact, according to the New York Times, TLP and the other private equity and investment bank firms involved in the Simmons deal, have made something like $750 million off the company, through fees and special dividends.

Uh . . . I know sometimes people find accounting a little intimidating, but—uh . . . $1.3 billion in liabilities on the one hand, contrasted with $750 million in fees and special dividends to the private equity firms feeding at the trough . . . do I really have to explain what this means? Or does everybody get the picture?

These two examples aren’t isolated—there are inumerable others like it—one could argue that the U.S. Treasury bond market is structurally no different—and they all add up to pretty much the same thing: The United States economy itself was and is being gutted and busted out.

These businesses were busted out—just like the mobsters in “GoodFellas”.

There are laws against this, of course: I enumerated them above, 18 U.S.C. §152 and §157, and they are very clear and unambiguous. They were written for exactly this sort of thing. When this sort of fraud occurs, you break out the lawyers, load them up with caffeine and righteousness, and send them off to do battle. We’ve got the prisons, we’ve got the evidence—this stuff is in the New York Times, for crying out loud.

Based on evidence gathered in the NY Times and Bloomberg—neither of them exactly Conspiracy Theory Central—you could successfully prosecute Maurice Greenberg and Thomas H. Lee Partners and their cronies for what they did to AIG and Simmons respectively. And in all the other cases going on, where Wall Streeters have walked away with obscene pay packages while leaving broken businesses behind, there’s practically a plaintive wail of retribution begging to be assuaged.

Only thing is—nobody is prosecuting anybody.

In the Scorsese movie, the gangsters don’t get hassled by the cops because—as the mobsters themselves tell it—the cops are in on the scam. The cops aren’t merely bribed, they’re brought in as partners. So the cops never bother chasing after the mobsters—why would they? They’d be biting the hand that feeds them.

Today, Timothy Geitner is the Secretary of the Treasury, having succeeded Hank Paulson, late of Goldman Sacks—which directly benefitted from the AIG both in the run-up to its collapse, and in the bailout orchestrated by . . . Paulson. And the other bureaucrats in government who are supposed to be policing the financial services sector, they all have deep ties to it, to such an extent that their present and future careers depend on maintaining those ties.

In the Scorcese movie, once the neighborhood restaurant was completely bankrupt, but before the insurance policy expired, they torched the joint so as to collect on the insurance—and then they went to dinner at a nice club, confident that their scam would never cause them to be hassled by the police or anyone else.

Today, Maurice Greenberg is happy, busy building his Cloned-AIG. Thomas H. Lee is happy on Beacon Hill or wherever he lives, sitting on his mountain of money, unmolested. Countless other fraudsters and hucksters who did, in outline, the exact same thing as these individuals are walking around, breathing free air, eating at restaurants you and I cannot afford, drinking $1,000 bottles of scotch, probably sleeping peacefully—I won’t venture to guess on what brand of comfy, durable, dependable mattress from a company that is no more.

Just like in GoodFellas, the gangsters have busted out the joint, and now there’s nothing left of what used to be a fine establishment.

I remember quite clearly walking home in 1990 after seeing “GoodFellas” and wondering why such obviously clever people as the gangsters portrayed in the movie would resort to crime to get ahead. Why not just apply that cunning to legitimate work, and make a legitimate living—even a legitimate profit.

Now I know where all the gangsters went: They went to Wall Street.
Posted by Palmoni at 5:26 PM