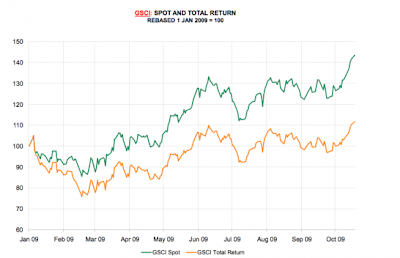 The Goldman Sachs Commodities Index has done very nicely this year, rising by nearly 45 percent since January 1. So if you had bought a commodity tracker fund then, you’d be pretty happy today, eh? Well, no.

This chart shows that the total return to an investor is a mere 12 percent. Measured since January 2005, the picture is even worse. Despite the boom, which has driven the index up by about 60 percent, our investor will actually have lost about 15 percent of his capital over four years.

In theory, commodity trackers should be as attractive as share index trackers. Pooled funds allow investors to buy an index at low cost, so why not do the same with commodities?

Standard & Poors reckons that $100 billion is invested in commodity tracker funds, and it is only now that the problems are becoming clear. Unlike shares, commodities need space and insurance for storage, so the funds buy the commodities forward, selling them before having to take physical delivery and buying forward again. Because they have strict rules about how and when they roll the contracts, the traders can see the forced sellers (and buyers) coming a mile off, and move their prices accordingly.

These funds are just another way to pass money from Main Street into the commodity traders pocket.

Wall Street's version of "legalized stealing."
Posted by Palmoni at 7:56 AM

Has your mind cleared up? Are you still holding MGM?

JCG has had a huge run and they just lifted forcast...my coworker said to buy it at 10 but I was scared at the time and now its higher than ever at 42....do you know what causes such a hugh rise?

Look at ANF the same story

Where do you see LIZ going? Man I had that under 3 but sold when. It went above 3. Did you pick up any?

Do you remember how much Paulson paid for his CNO stocks? I think it's filling the gap down today...I remember you saying the book was over 10...is there a chance?

It was upgraded today so the analyst could take the $37.74 closing price:
Introducing coverage with a Buy rating and $45 target.
We believe JCG’s performance has started to turn around in 3Q09 after a rough start to 2009.
We see potential upside to 3Q09 EPS estimates as we believe that JCG’s 3Q09 comps should be at least flat vs. (MSD) guidance and (3.7%) consensus; comp sales declined (3%) in 3Q08, (13%) in 4Q08. We expect direct sales to also be ahead of expectations given shift in inventory vs. last year when stores had to clear unsold goods due to direct systems implementation problems.
Clean inventory and lack of unplanned promotions indicates that JCG’s sales trend is holding up and that it does not need to aggressively push conversions through discounting.
JCG’s upscale product at good values has sold through well this fall with customers seeking newness, novelty and color; our channel checks continue to see good store traffic and conversions and a broad range of customers.

Summary
We have initiated coverage of the shares of J. Crew Group (JCG) with a Buy rating and $45 target. We believe that JCG will be one of the winners long term given its strong merchandise positioning, brand equity, multi channel model, small store base with growth prospects and new opportunities such as Madewell and crewcuts. JCG offers upscale fashion and quality in apparel and accessories and we believe that this merchandise mix and execution continues to appeal to a wide range of customers.

This is an informative article and the conversation below the article is very helpful.
So, if we hold investment for longer period, then it going to benefit us.

i'm totally confused now...why did we just go up up up today?

was trying to get in on LIZ...but it was tough to gauge where it wanted to go so i missed out.

What it lookes like is that all the "selling" has been orchestrated by those who want the market down. They puke up stocks with no regard to price (shorting them) and then the next day they buy back the stocks they puked up becaue they couldn't get any follow thru selling.

In the meantime they sell the basic industry stocks as though we are going to have a rollover in the entire economy which isn't going to happen.

I let some winners go yesterday that I had 100-200% gains on that I was going to sell in January but that's how the market works.

The best strategy in this whole market has been to be reckless and an unabashedll bull because the pullbacks always remain so shallow.

thanks for the insight....you seem to see things clearly again.